Apple alongside the second-generation Apple TV 4K debuted a redesigned version of the Siri Remote, which is now available to customers with new ‌Apple TV‌ orders and as a $60 standalone replacement for the original ‌Siri‌ Remote.

Subscribe to the MacRumors YouTube channel for more videos.
We picked up the updated ‌Siri‌ Remote to see if it's worth picking up if you have an original ‌Apple TV‌ 4K or HD and are tired of the first iteration of the remote, which has several shortcomings.

Apple entirely overhauled the ‌Siri‌ Remote's design. It has an all-aluminum body that does away with the touchpad interface, instead adopting a touch-based clickpad and several additional buttons for control purposes. 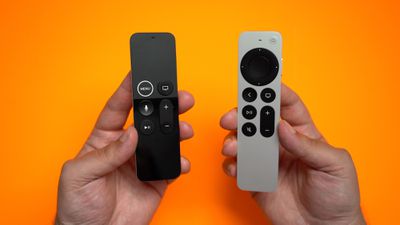 The new remote is thicker than the prior version, and Apple has used that thickness change as an explanation for why the ‌Siri‌ Remote 2 doesn't need Find My. It's bigger, thicker, and shouldn't get as easily lost in couch cushions, though whether that's true remains to be seen and will vary from household to household.

Along with no ‌Find My‌, the new remote does not feature a gyroscope or an accelerometer, so you can't play games with it. Apple now recommends gaming controllers for playing games rather than the standard remote.

The clickpad that Apple added can be used like a standard directional button, and you can also swipe around if you want, but you don't have to. It's much more versatile than the prior touch interface, and it's useful to be able to scroll/scrub through content using a circular swipe gesture.

The buttons are tactile and satisfying to press, and Apple has added dedicated mute and power buttons along with the standard buttons for play/pause, volume control, and more. ‌Siri‌ can be activated through a side button.

Like the prior ‌Siri‌ Remote, you can charge this one using Lightning, and other than the physical changes, it operates the same as the original remote so it should be intuitive for most ‌Apple TV‌ users. If you're fed up with the original ‌Siri‌ Remote, the updated version has the potential to be a good alternative if you don't mind the selling price. Get a new ‌Siri‌ Remote? Let us know what you think in the comments.

azentropy
Just got mine an hour ago so haven't done anything with it yet. However I am perplexed with the included cable. Strange as to why would Apple include an USB-A to Lightning charge cable and not a USB-C to Lightning.
Score: 11 Votes (Like | Disagree)

Gsmaniac
The mute, and the play/pause buttons need to be switched around.
Score: 10 Votes (Like | Disagree)

rle737ng
I absolutely hated the old Siri remote. Ordered the new one the first day. They should have designed this in the first place. Finally, a remote you can pick up without changing something.
Score: 7 Votes (Like | Disagree)

jz0309
so many complaints here about the old Siri remote, everyone hailing the new one, and now you need support docs and video tutorials on how to use it, eg fast forwarding a video ... this is just hilarious to watch.
I do have 2 ATV 4k in the house, original Siri Remote and neither my wife nor I lose it or are complaining about its functionality, but everyone is different ...
Score: 5 Votes (Like | Disagree)

that's a TV app button, not a home button. That's good to have but I also I want a dedicated button that takes you to the home screen.

Good to know - but this was always available on the old remote as well.

Always boggled my mind that people didn't know all the things the old remote could do. You could skip/forward back 10s and also a touch (without a click) would allow you move around just like the arrows on this new remote as well. I always thought the old remote got way too much hate.

That said - this design looks good. I'll be picking up one of the new ATVs... and if I like the remote I'll probably replace all of my remotes (have ATV 4ks on 3 other TVs).

Functionally, I loved the old Siri Remote, too (when it worked — I seemed to have accuracy issues with finger positioning on the trackpad and it would do weird stuff which happened with multiple remotes). I just think the design was far from practical for its setting; it was annoyingly sensitive. I think you'll find much much improvement with the new one. I know that I hadn't expected to like it as much as I do.
Score: 3 Votes (Like | Disagree)
Read All Comments