Apple has been promoting the new M1 iMac, ‌M1‌ iPad Pro, and second-generation Apple TV 4K following their announcements, and Apple's vice president of product marketing for home and audio Tim Twerdahl today did an interview with MobileSyrup to discuss the revamped ‌Apple TV‌ 4K and the updated Siri Remote. 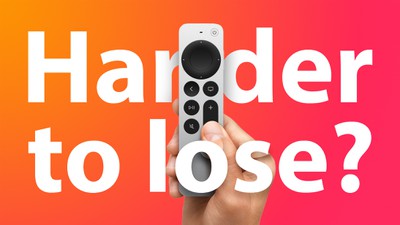 Prior to the release of the new ‌Apple TV‌ 4K, there were rumors that the updated remote would include Find My functionality, which didn't happen. Twerdahl said that it was not a priority because the ‌Siri‌ Remote is thicker and won't get lost as easily.

With the changes we've made to the ‌Siri‌ Remote - including making it a bit thicker so it won't fall in your couch cushions as much - that need to have all these other network devices find it seems a bit lower.

He said that Apple shifted to a new remote design because Apple is always aiming to deliver "richer experiences to people at home," and the kinds of content and how people are getting Apple TVs has changed. In some cases, the ‌Apple TV‌ is being used as a total cable box replacement, necessitating new remote functionality like a mute button.

We recognize that because a lot of people were moving to the ‌Apple TV‌ as the one box they have, having one remote that did it all in terms of powering up and down your system, would be important, so we wanted to add that as well. We knew that there was a group of customers who really had grown up on or historically used five-way controls -- up down left right select -- and just felt comfort with that. We knew that there was a lot of power in the swiping, but we thought that maybe something that delivered on the best of both worlds was a great way to enhance the experience of customers.

The new ‌Siri‌ Remote ditches the gyroscope and accelerometer that were included in prior versions, so the remote no longer serves as a game controller. There was a time that Apple required all ‌Apple TV‌ games to support the ‌Siri‌ Remote, but there's been a major change in thinking at Apple.

Twerdahl says that Apple believes that if you want to play a game, "a dedicated game controller is the best experience."

Twerdahl also further discussed the design of the remote, gaming on the ‌Apple TV‌, and he highlighted eARC and the option to have other sources connected to the TV use ‌Apple TV‌ to output to HomePods, with his full interview available over at MobileSyrup.

AngerDanger
Nice! Now I don't have to buy an AirTag for my backpack because it's sooo much thicker than an TV remote!
Score: 155 Votes (Like | Disagree)

Virgo
You're losing it wrong.
Score: 125 Votes (Like | Disagree)

pugxiwawa
Basically 2 different teams didn't talk to each other so the feature is not implemented.
Score: 69 Votes (Like | Disagree)

tzm41
Then why do you need Find My for your backpack or bike or anything larger than the new Siri Remote?
Score: 40 Votes (Like | Disagree)
Read All Comments