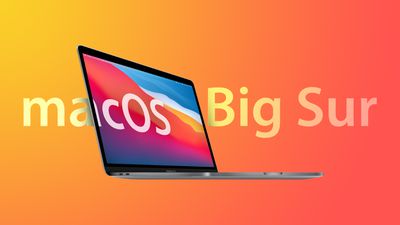 The new ‌‌‌‌macOS Big Sur‌‌‌ 11.4 update can be downloaded for free on all eligible Macs using the Software Update section of System Preferences.

macOS Big Sur 11.4 lays the groundwork for two upcoming Apple Music features: Spatial Audio with Dolby Atmos and Lossless Audio, both of which will be available on the Mac.

It also adds support for Apple Podcasts subscriptions, and fixes a number of bugs, as outlined in Apple's release notes.

This release also fixes the following issues:
- Bookmarks in Safari may get reordered or moved into a folder that can appear hidden
- Certain websites may not display correctly after your Mac wakes from sleep
- Keywords may not be included when exporting a photo from the Photos app
- Preview may become unresponsive when searching PDF documents
- 16-inch MacBook may become unresponsive when playing Civilization VI

Apple's attention will soon be focused on the next-generation version of macOS, macOS 12, which is expected to be unveiled at the Worldwide Developers Conference that kicks off on June 7.

Nearly 4 GB download every time!! What ever happened to incremental updates? ?

That is an incremental update. Full install is over 12GB.
Score: 12 Votes (Like | Disagree)

There are reports that 11.4 allegedly fixes SSD "thrashing" issue on M1 Macs. I can't test that personally cause i have Intel MacBook.

Don't waste your time with that. It won't help.

Agreed. All they know is "reinstall macOS".
Score: 5 Votes (Like | Disagree)

I'll give you two more versions after Big Sur, tops. But macOS 14 or whatever will be Silicon only.

Honestly, I think this time will be different. Apple has many, many more Intel Macs out there now than they did PPC ones back then. I can't see them dropping support that quickly. There are rumors that an updated Mac Pro is on the way with an Intel chip, which will most likely be Apple's last Intel Mac. If this is the case, I can see support for Intel Macs for at least another 5 years.
Score: 4 Votes (Like | Disagree)
Read All Comments