Apple is working on a radically redesigned version of the MacBook Air, featuring an even "thinner and lighter" design, multiple color options, and changes to almost all aspects of the machine, according to recent reports. 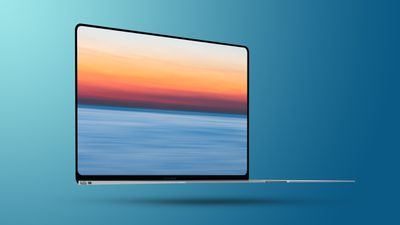 Prosser said that the design of the ‌‌MacBook Air‌‌ is no longer tapered, but it is considerably thinner overall, barely fitting the height of a USB-C port. There will apparently be two USB-C ports, with one located on either side of the machine. Well-connected Bloomberg journalist Mark Gurman has also said that the next ‌MacBook Air‌ will feature a "thinner and lighter" design.

Apple's current ‌MacBook Air‌, which has had the same design since 2017, is 0.63-inches thick at its thickest point, and weighs 2.8 pounds. Despite the "Air" moniker, the current ‌MacBook Air‌ is actually 0.02-inches thicker than the MacBook Pro at its thickest point. Making the redesigned ‌MacBook Air‌ both thinner and lighter would help to further differentiate it from the 13-inch MacBook Pro and more authentically live up to its name.

One of the ways in which Apple appears to be making the next ‌MacBook Air‌ lighter is by shrinking the size of the laptop. Gurman explains that Apple has discussed shrinking the borders around the 13-inch screen for a smaller overall footprint, while maintaining the same display size as the current ‌MacBook Air‌ and a full-size keyboard.

Prosser said that, just like the 24-inch ‌iMac‌, the new ‌‌MacBook Air‌‌ will feature white bezels and a white Magic Keyboard, with full-sized function keys. The larger function keys are said to have forced the entire keyboard down, thereby reducing the size of the trackpad. The underside of the ‌‌MacBook Air‌‌ will also see significant design changes, no longer having four rubber feet for support. Instead, there will be two long vertical strips.

One of the most significant changes, according to Prosser, will be the range of colors offered on the ‌‌MacBook Air‌‌ for the first time, mirroring the 24-inch ‌‌iMac‌‌'s color palette. Specifically, the colors will apparently be "very close if not identical to the shades that you see on the stands for the new 24-inch iMacs." The ‌‌iMac‌‌ features more pastel colors on its stands, as opposed to the bolder, more striking colors on the ‌‌iMac‌‌'s rear.

The next ‌MacBook Air‌ is expected to feature an Apple silicon chip and the return of MagSafe charging, which has not been present on the ‌MacBook Air‌ since 2017. The MacBook Pro is also expected to regain the ‌MagSafe‌ charging connector this year, which Gurman says may facilitate faster charging speeds.

The current ‌MacBook Air‌, upgraded in November 2020 with Apple silicon, is expected to remain in Apple's lineup as an entry-level offering. The company is also reportedly considering offering a larger 15-inch MacBook Air at some point in the future, but that idea has been shelved for the next generation.

The new ‌MacBook Air‌ will be released in the second half of 2021 at the earliest or in 2022, according to Gurman and Prosser. Apple analyst Ming-Chi Kuo previously said that Apple will introduce a new ‌MacBook Air‌ at some point in 2022, suggesting there may not be a refresh in 2021. Kuo also said the ‌MacBook Air‌ coming in 2022 may feature a mini-LED display, a prediction also echoed by DigiTimes. Apple has already adopted a mini-LED display for its 12.9-inch iPad Pro.