Belkin today announced the launch of the new Belkin Soundform Connect Audio Adapter with AirPlay 2 support, which is designed to turn any traditional stereo speaker into an ‌AirPlay‌ 2-enabled speaker. 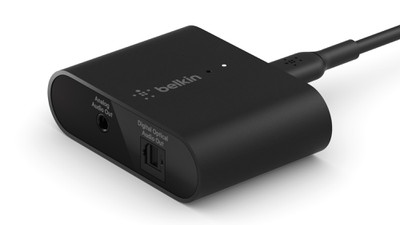 Those with traditional speakers can use the Soundform Connect to gain multi-room audio with other ‌AirPlay‌ 2 speakers, and can use Siri to do things like control the volume. Speakers connected to the Soundform Connect are HomeKit-enabled, viewable in the Home app, and able to be used in scenes and automations.

Belkin says that the Soundform Connect is compatible with any existing powered speaker or receiver that accepts optical or 3.5mm input.

The Soundform Connect Audio Adapter can be purchased from the Belkin website for $99.99.

robotica
Apple should have added this into the HomePod mini. Would have been an instant buy for me.
Score: 15 Votes (Like | Disagree)

kakgungor
I’m assuming the answer to this is no, but does this have an Ethernet port or does it rely on Wi-Fi?

Edit: confirmed that it does not have Ethernet ? so this is not the holy grail AirportExpress replacement I’ve been waiting for.

Devnul0
Belkin can have my money, I've been waiting for something like this. Right now I have ATV4K → TV → HDMI return → Stereo which means if I want to listen to music from my iTunes library, or stream anything via AirPlay, I have to have the TV on. I can use the optical connector on this device and go straight into the stereo and then tell my desktop Mac to AirPlay to it and get music without the TV on. The other solution would be a lot more expensive, and that would be to update the stereo to support 4K HDMI (with all the bells and whistles) passthru, and have all my inputs feed into the stereo.

I can also use one to feed into the outside deck sound system, which currently is based on an ancient Airport Express that I can't even reconfigure any more.

ClockWork72
At $99 not very compelling, now if it was closer to $50 then that would put it closer to what an airport express is going for currently. Let’s see it might have some specs that make it a better option.
Score: 7 Votes (Like | Disagree)

Do yourself a favour and just buy a receiver with ethernet and Airplay support. That way there is there is less wireless traffic and only 1 volume knob that you control directly from your phone.

Some people have vintage equipment they like. This will be great for them.
Score: 5 Votes (Like | Disagree)
Read All Comments