One lucky Reddit user received his second-generation Apple TV 4K and Siri Remote earlier than expected in Finland, and he shared some initial thoughts and opinions on the new set-top box. 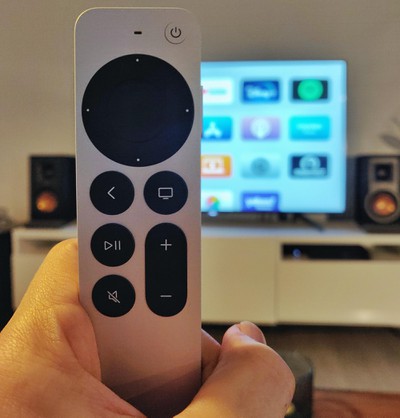 The new trackpad on the ‌Siri‌ remote "feels good" and though the buttons are clicky, they're "still solid."

I'm almost always navigating with the trackpad. I just set the tracking speed to slow and it's feels good to me.

Rotate to seek doesn't work, at least right out of the box... Does it need to be enabled? Maybe I haven't really understood how to use it... As a good ol' click wheel as on the iPods, right? It just recognizes my input as swiping on the trackpad.

The buttons feel a bit clicky, but still solid.

As for the ‌Apple TV‌ 4K itself, the interface runs smoothly and installing apps is quick, but the Reddit user did not have a prior-generation for comparison.

Nothing to complain. Runs smooth on every corner and installing apps is so quick it's ridiculous. Can't really compare to the older Apple TVs, since that this is my first Apple TV... But smoother than my Sony Android TV software, that's for sure.

Customers who purchased an ‌Apple TV‌ 4K with ‌Siri‌ Remote from Apple will start seeing deliveries on May 21, with customers in Australia and New Zealand set to receive their devices first, so we should soon be hearing additional opinions on the redesigned ‌Siri‌ Remote and the speed improvements introduced with the A12 Bionic chip.

People wanted a redesign and they get it but still somehow complain
Score: 48 Votes (Like | Disagree)

ThirteenXIII
idk why people complain about, I'm not a remote connoisseur, but what other remotes have rechargeable batteries, aren't littered with hideous buttons and useless inputs, or wireless trackpad and a microphone to accommodate user input?
Score: 19 Votes (Like | Disagree)

I disagree. I think it’s clean, has hierarchy, good for no-look, and solves every issue the previous remote had except for no way to change inputs.
Score: 18 Votes (Like | Disagree)

i am guessing they went with easy usage over a nice design this time around
Score: 13 Votes (Like | Disagree)
Read All Comments

Thursday April 29, 2021 2:15 am PDT by Tim Hardwick
Serial leaker Jon Prosser has today claimed the new Apple TV 4K will launch on May 21, the same day that the new redesigned 24-inch iMac and new iPad Pro models are now expected to become available, based on retailer listings. Prosser's claim came in a tweet updating his earlier predictions for the launch dates of Apple's new iPad Pro, shortly after MacRumors broke the news about UK retailer ...
Read Full Article • 76 comments

Tuesday May 18, 2021 5:06 am PDT by Sami Fathi
Apple today confirmed that the new 24-inch iMac, iPad Pro, and updated Apple TV 4K will be available for customers in Apple Stores and retail locations around the world on Friday, May 21. Pre-orders for the products began earlier last month, and Apple previously said the new products will be available in the second half of May. The new iPad Pro features the M1 Apple silicon chip, first...
Read Full Article • 16 comments