During its Google I/O developers conference today, Google previewed Android 12, the next version of Android that will ship to millions of Android devices around the world later this year. 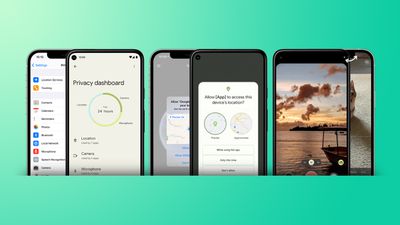 Google is mainly targeting customization as the theme for this year's new release and a new design language that it's calling "Material You." Google says this new design language brings a "humanistic approach to design," an approach that "celebrates the tension between design sensibility and personal preference, and does not shy away from emotion."

Google is offering users nearly unlimited customizability for system shapes, colors, and overall feel. Google aims to offer users customization through color extraction, which automatically detects colors that are most dominant in a user's wallpaper and then applies them throughout the system, such as on the lockscreen, widgets, and more.

Your Android devices are now faster and more responsive with better power efficiency so you can use your device for longer without a charge. This was achieved by some under-the-hood improvements including reducing the CPU time needed for core system services by up to 22% and reducing the use of big cores by the system server by up to 15%.

Beyond design changes, Google introduced new privacy features that take some inspiration from iOS 14, released this past September. One new feature is a microphone and camera indicator, which provides a dot in the top-right hand corner of a device whenever an app is accessing the camera or microphone. Google is also making it easier to disable a specific app's access to the microphone and camera through new toggles in Quick Settings.

Another privacy-centric feature coming with Android 12 is the ability for users to give apps access to either their precise or approximate location. Much like iOS, whenever an app requests access to a user's location, an option to provide "Precise" and "Approximate" locations are given.

Beyond these new privacy features in Android 12, we’re also building privacy protections directly into the OS. There are more opportunities than ever to use AI to create helpful new features, but these features need to be paired with powerful privacy. That’s why in this release we’re introducing Android Private Compute Core. It allows us to introduce new technologies that are private by design, allowing us to keep your personal information safe, private and local to your phone.

Beyond adopting some iOS 14 privacy features, Google is also taking inspiration in some other areas. Google introduced "Google Digital Car Key," which, much like Apple's Digital Car Key feature available on iOS 13 and ‌iOS 14‌, lets car owners use NFC on their supported Android device to unlock compatible vehicles.

As reported by 9to5Google, Google is also adding support for Apple's Beats headphones to its "Google Fast Pair" process, which aims to make it easy to pair Bluetooth headphones and accessories by simply bringing them near your device. The new feature takes heavy inspiration from Apple users' seamless experience when pairing AirPods, HomePod, and other accessories to their iPhone or iPad.

Android 12 will be under beta testing throughout the summer starting today, and Google says it will be available for a wide range of Android devices later this year.

Still a "me-too" OS. How anyone thinks Android is "better" than iOS I'll never understand.

Still a "me-too" OS. How anyone thinks Android is "better" than iOS I'll never understand.

dabi
Honestly I think it looks great. It's cool how the colors will be customisable now, they're really embracing one of the bigger strengths of Android over iOS. We'll see if it's really as smooth as they're promising though, Android always gets a bit laggy when too much is going on. Also in the past their Material design concept videos didn't match the final product, so hopefully it won't be the case this time.
Score: 17 Votes (Like | Disagree)

I didn’t say they didn’t work. But it’s ignorant to say iOS handles it better when on android you can get a really good workflow going in just the notifications area.

do yourself a favor and try for one second to remove yourself from the hate train and take an objective look at the competition.
Score: 14 Votes (Like | Disagree)

Wouldn’t say redesign, a bit more customization and a theme store would be nice.

FFS let us get rid of the home bar and change the camera and flashlight shortcuts on Home Screen.

Not asking for to much ?‍♂️
Score: 13 Votes (Like | Disagree)
Read All Comments