Apple is working on a Nintendo Switch-style handheld games console, according to a sketchy new rumor coming from Asia. 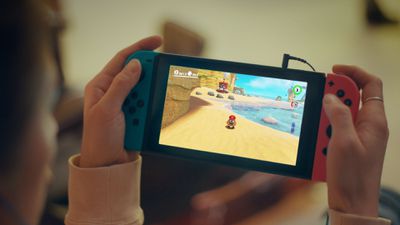 According to a post on a Korean forum, shared by Twitter user @FrontTron, Apple is developing a portable hybrid games console, comparable to the Nintendo Switch. While the sourcing of the rumor is suspect, it has gained some visibility in larger news outlets over the past day or two, so we figured it was at least worth acknowledging.

The device will apparently feature an entirely new Apple-designed application processor, neglecting to use an A-series or M-series chip. This chip appears to be specifically designed for gaming and is said to feature enhanced GPU performance and improved ray tracing.

Apple is purported to currently be in negotiations with a number of well-known video game studios, including Ubisoft, the maker of popular titles such as "Assassin's Creed," "Far Cry," and "Watch Dogs," about developing games for the new device.

It is unknown where this console would be placed between devices such as the iPad and the Apple TV, which both offer integration with Apple Arcade and support for a host of external controllers, including some that take cues from the Nintendo Switch's design.

It is unclear where these rumors now stand given the recent launch of the second-generation Apple TV 4K, which seemed to take a step back in terms of gaming with its older A12 Bionic processor and the redesigned Siri Remote, which lacks the accelerometer and gyroscope present in its predecessor.

Apple did launch its own games console in 1996 with the Apple Bandai Pippin, which was largely unsuccessful and discontinued following Steve Jobs' return to the company. Rumors about the company re-engaging with the console gaming market have circulated intermittently ever since but have never come to fruition.

The reliable leaker known as "L0vetodream" said last year that Apple was working on its own gaming controller, and after a spate of rumors about a gaming-focused ‌Apple TV‌ product, it is not completely out of the question that Apple could be working on some sort of games console. Even so, without more concrete information it is important to take this rumor with a heavy pinch of salt.

duervo
Very sketchy. Especially when you can just use an iPhone with a controller attachment to get the same result.

jonnysods
Isn’t the iPhone and iPad a gaming device? Not sure about this rumour.
Score: 14 Votes (Like | Disagree)

tubular
I could see it as a natural outgrowth of the iPod Touch.
Score: 7 Votes (Like | Disagree)

nattK
The only two game controllers sold on the Apple Store (the popular SteelSeries Nimbus+ and Sony's PS4 Dualshock4) are both showing as "sold out." Does that mean we'll see something from Apple soon with regards to a game controller for the new Apple TV?
Score: 7 Votes (Like | Disagree)

Apple Knowledge Navigator
I can understand a controller-attachment for iPads, especially given how many people already own them - but an actual console?

I hope Apple understands that hardware alone isn't what makes a good gaming experience, it's the quality of the franchise, concept and development. Nintendo has decades of experience and intellectual property, which love them or hate them is what sets them apart.
Score: 7 Votes (Like | Disagree)

Some sort of portable gaming slab ... or pad.

An iPad, if you will.
Score: 6 Votes (Like | Disagree)
Read All Comments