Apple's iPhone and iPad have supported gaming controllers for quite some time now, and there are several on the market, but the new Backbone One controller is being praised as one of the best new controllers to use with Apple's iPhones for mobile gaming.


The Backbone One connects to the sides of the ‌iPhone‌ and offers a standard controller layout with clickable thumb sticks, d-pad, analog triggers, action buttons, and more. It's designed to fit all of Apple's iPhones and works with any ‌iPhone‌ that has iOS 13 or later installed. There's a Lightning connector on one side that plugs into the ‌iPhone‌'s Lightning port for connectivity, so Bluetooth is not required and latency remains low. 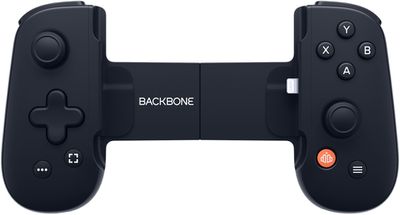 The Backbone One features a dedicated button for recording gameplay or taking screenshots, and games can be recorded at up to 1080p at 30 frames per second. A Backbone app button also launches right into the Backbone app, and there's a 3.5mm headphone jack for use with headsets. Since it connects over Lightning, charging is not required.

With the Backbone One app, users can launch games and access game recordings, plus interact with friends through social features. When someone you're friends with also has a Backbone One, when a game is started you receive a push notification and can join in and you can communicate with one another.

The Verge said that Backbone "makes the ‌iPhone‌ feel like a bona fide gaming platform" and that the app features feel like "a gaming experience that somehow beats Apple to the punch of fleshing out its own gaming ambitions."

The Backbone One is priced at $99 and it must be purchased through the Backbone app. [Direct Link]

$100? Who is seriously that into iOS gaming that they would spend $100 bucks on a controller?

I agree it does seem a lot. But on the flip side, this kind of makes your iPhone like a switch hardware wise. Throw in some more involved games and why carry a portable game console as well as a phone when it can just be a single device?
Score: 16 Votes (Like | Disagree)

Pretty sure they don’t take 30% from hardware sales. Eg, there’s no way amazon hands over 30% of sales.
Score: 12 Votes (Like | Disagree)

luvbug
I don't play games, but this looks like a well thought out piece of engineering (and I am an engineer, retired).
Score: 10 Votes (Like | Disagree)

The Backbone One is priced at $99 and it must be purchased through the Backbone app.

ArtOfWarfare
If you want to buy me a console, you're going to have to show me some serious games for it.

Give me Doom Eternal, Metroid Prime 4, and Breath of the Wild 2 and I'll immediately buy it. Other AAA games will be accepted as substitutes. B+ Knock-offs and spin-offs (the best the iOS app store generally has) will not be.
Score: 7 Votes (Like | Disagree)
Read All Comments