A new study looking at the effects of low-light functions on smartphone users' sleeping habits suggests that features like Apple's Night Shift mode don't actually improve sleep at all. 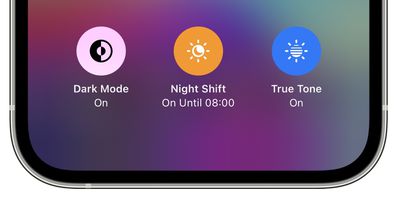 Introduced in iOS 9, ‌Night Shift‌ is designed to cut down on the amount of blue light that an iOS device puts out during the evening hours. The feature uses the clock and geolocation of an iPhone or iPad to determine when it's sunset, and automatically shifts the colors of the display to warmer colors, returning the display to its regular settings in the morning.

Now found on most smartphones in some form, ‌Night Shift‌ is based on studies that have demonstrated that blue light can negatively impact sleep by altering the body's circadian rhythm. However, the results of a new study from BYU published in Sleep Health have undermined that premise.

"In the whole sample, there were no differences across the three groups," Jensen said. "Night Shift is not superior to using your phone without Night Shift or even using no phone at all."

The study included 167 adults between the ages of 18 to 24 who said they use a smartphone daily. The participants were asked to spend at least eight hours in bed, during which they wore an accelerometer on their wrist to record their sleep activity.

Individuals who were assigned to use their smartphone also had an app installed to monitor their phone use. The app measured sleep outcomes that included total sleep duration, sleep quality, wake after sleep onset and the time it took to fall asleep.

In the second part of the study, the researchers split the sample in two groups – one consisting of participants who averaged about seven hours of sleep, and another that included those who slept less than six hours each night.

The group that got seven hours of sleep saw a slight difference in sleep quality based on phone usage, while those who didn't use a phone before bed experienced better sleep quality compared to both those with normal phone use and those using ‌Night Shift‌. Within the six-hour group, which had the least amount of sleep, there were no differences in sleep outcomes based on whether the participants used ‌Night Shift‌ or not.

The results suggest that blue light is only one factor that creates difficulty falling or staying asleep, and it's important not to discount the affect of physical interactions like texting, scrolling and posting on sleep outcomes.

"While there is a lot of evidence suggesting that blue light increases alertness and makes it more difficult to fall asleep, it is important to think about what portion of that stimulation is light emission versus other cognitive and psychological stimulations," said Jensen.

Since its debut on iOS, ‌Night Shift‌ has been included in macOS since Sierra. Mac users can enable or disable the feature using the ‌Night Shift‌ tab in System Preferences -> Display.

B4rbelith
It’s just easier on the eyes. I’m definitely grateful it exists, even if it makes no difference to sleep patterns.
Score: 66 Votes (Like | Disagree)

I7guy
Not surprised, but the warmth of night shift is nice at night.
Score: 25 Votes (Like | Disagree)

contacos
I guess it really does not matter if you look at orange or blue TikTok videos until 3 am ;) endless scrolling feeds are causing sleep issues, not the color of your screen
Score: 20 Votes (Like | Disagree)

Starship77
That kinda makes sense. I never noticed any difference in sleep quality. I still use and will continue to use Night Shift, tho. It’s much more comfortable on the eyes in a darker environment.
I wish you could set it to turn on whenever is dark for a certain period of time (enough for the eyes to adapt)
Score: 13 Votes (Like | Disagree)

himanshumodi
Yeah, it always felt like they were going for a placebo effect there. If there's anything, it's the content I am surfing on the phone that's probably disrupting my sleep. That can't be helped by the sleep mode.
Score: 12 Votes (Like | Disagree)

jimthing
TBH, I wish we could turn down the brightness even further, for when using in the dark in bed. I still find the lowest setting too bright.

i guess this is another reason for people to use Kindles to read on. A market Apple doesn't do, or want to do, presumably thinking it'd undermine their iPad market.
They don't even update the book-sized iPad Mini properly with regular or worthwhile updates.
Score: 12 Votes (Like | Disagree)
Read All Comments