By MacRumors Staff on May 5, 2021
Jump to How Tos Articles

Introduced in iOS 9.3, Night Shift is a feature that cuts down on the amount of blue light an iOS device is putting out during the evening hours to iPhone and iPad users get better sleep. Night Shift is based on studies that have demonstrated blue light can negatively impact impact sleep by altering the body's circadian rhythm.

With Night Shift mode, when the sun goes down, the iPhone or iPad's screen will automatically change towards the warmer (yellower) colors in the spectrum, reducing blue light. In the morning, the display returns to its normal temperature color, mimicking natural light. Night shift can be set to come on when the sun sets or it can be toggled on with a Control Center button.

Monday March 27, 2017 12:51 pm PDT by Juli Clover
Night Shift, the feature first introduced in iOS devices with iOS 9.3, has expanded to the Mac with the release of 10.12.4. Night Shift is compatible with 2012 and newer Macs, so it won't work on older machines. For those unfamiliar with Night Shift, it's designed to cut down on the amount of blue light you're exposed to during the evening by shifting the display of a Mac to a more yellow...
Read Full Article (92 comments)

How to Use Night Shift Mode in iOS 9.3

Thursday January 14, 2016 1:07 pm PST by Juli Clover
Night Shift, a major new feature iOS 9.3, is a display-based setting that lets you "warm up" an iPhone or iPad's screen at night to cut down on blue light exposure. Similar to f.lux on the Mac, Night Shift will automatically change the color temperature of an iOS device's display to reflect the time of day. With Night Shift, an iPhone or iPad screen will look bright white with a blue-based...
Read Full Article (86 comments) 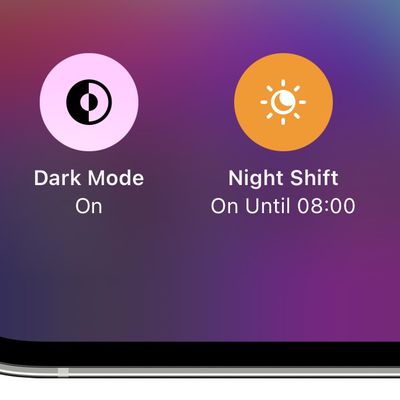 Wednesday May 5, 2021 4:50 am PDT by Tim Hardwick
A new study looking at the effects of low-light functions on smartphone users' sleeping habits suggests that features like Apple's Night Shift mode don't actually improve sleep at all. Introduced in iOS 9, ‌Night Shift‌ is designed to cut down on the amount of blue light that an iOS device puts out during the evening hours. The feature uses the clock and geolocation of an iPhone or iPad to...
Read Full Article 101 comments 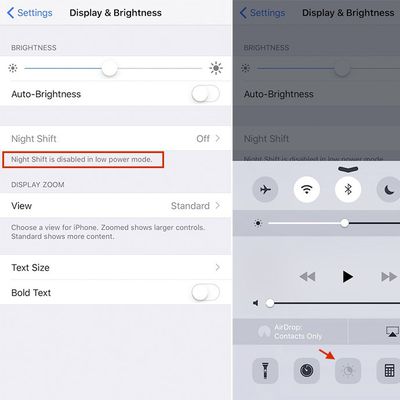 Wednesday March 2, 2016 8:02 am PST by Joe Rossignol
Apple has made some changes to Night Shift in iOS 9.3 betas 4 and 5. The most notable change is the disabling of the feature when in Low Power Mode. The toggle switch in both the Night Shift settings and Control Center are now grayed out in Low Power Mode. The new change has generated some complaints since it seems that users will want to use both features in the evening hours. Night ...
Read Full Article 80 comments

Developers Behind F.lux Call on Apple to Allow F.lux App for iOS Devices

Thursday January 14, 2016 2:39 pm PST by Juli Clover
With iOS 9.3, Apple introduced Night Shift, a feature that is designed to cut down on nighttime blue light exposure from iOS devices to encourage better sleep. Its similarity to the popular f.lux app for Mac did not go unnoticed, especially since Apple put a stop to an f.lux for iOS app just two months before Night Shift debuted. The developers behind f.lux have now published an official...
Read Full Article 275 comments
Newer Posts
Archives
Older Posts