Apple today emailed customers who have purchased a standard AppleCare plan for their Apple TV devices to let them know that coverage has been extended from two years to three years. 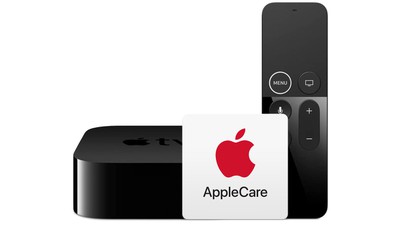 Customers who purchased ‌AppleCare‌ for the ‌Apple TV‌ will be now receiving a total of three years of coverage based on the date that they original bought the plan. ‌AppleCare‌ for ‌Apple TV‌ end dates will be automatically adjusted.

In the emails, Apple does not specify why it is extending the ‌Apple TV‌ ‌AppleCare‌ plans, but it is likely because of the transition to ‌AppleCare‌+ for ‌Apple TV‌, which Apple made available alongside the launch of the second-generation ‌Apple TV‌ 4K.

‌AppleCare‌+ for ‌Apple TV‌ is priced at $29, with a monthly purchase option also available.

(Thanks, Mark and Ryan!)

samh004
Like others I question the need for AppleCare on a device that doesn’t move and in many cases sits in a TV console?

My phone I can drop while using it, but save for the remote, I shouldn’t be constantly picking up my AppleTV.
Score: 9 Votes (Like | Disagree)

countryside
Unless they let us download media to the Apple TV for travel/offline streaming (i.e. Netflix shows, HBO shows, etc for when traveling to places with poor internet)... I will not need AppleCare on my stationary Apple TV devices.
Score: 6 Votes (Like | Disagree)

portland_bill
High risk strategy from Apple considering how dangerous it is behind most TV units.
Score: 6 Votes (Like | Disagree)

Could this point to a longer duration between hardware updates?

I think it is to help persuade customers to feel comfortable buying Apple. It is also easy profit.
Score: 5 Votes (Like | Disagree)

lazyrighteye
Could this point to a longer duration between hardware updates?
Score: 4 Votes (Like | Disagree)

Like others I question the need for AppleCare on a device that doesn’t move and in many cases sits in a TV console?

My phone I can drop while using it, but save for the remote, I shouldn’t be constantly picking up my AppleTV.

I agree with you except that numerous 1st gen HomePod owners have reported hardware failures. This device also sits on a table or shelf and doesn’t move. AppleCare+ is $40 a HomePod OOW replacement is $279.

But for the cost of Apple TV, I’d probably risk it just like how I don’t have AC+ on a $99 HomePod mini.
Score: 3 Votes (Like | Disagree)
Read All Comments