Prior to the launch of the new iPad Pro models, rumors suggested that the 12.9-inch ‌iPad Pro‌ would be in short supply, and it appears those rumors were correct. 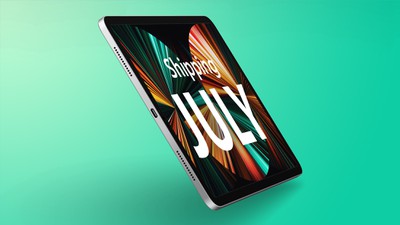 The ‌iPad Pro‌ became available to order at 5:00 a.m. Pacific Time this morning, and right when it became available for purchase, shipping dates were at May 21 to May 27, so those who ordered earliest will be getting the new tablet in May.

The 11-inch ‌iPad Pro‌ model is still readily available for purchase and will deliver to customers by May 27.

Both ‌iPad Pro‌ models have M1 chips, Thunderbolt connectivity, and front-facing camera improvements, but the 12.9-inch model also has a mini-LED display, which is believed to be responsible for the supply shortages. Bloomberg earlier this month said that Apple suppliers are experiencing poor manufacturing yields of the mini-LED display.

xxray
I was going to get 128GB, but I just ordered the 2TB to get it sooner.

GO GET UM BOYS!
Spend your hard earned cash and pay top dollar.
I don't need to spend that kind of money for an iPad Pro 12.9
Last years model still works for me.
Get a Mac mini for half the cost of an iPad Pro 12.9 and get a REAL OS and the same power.

How well does that Mac mini do for you when you want to sketch outdoors? Or do anything else outdoors? Or in a coffee shop? Or on a camping trip? Or on a plane? Or in your bed? Or basically anytime you want to do something away from your desk?

Different tools are for different jobs.
Score: 22 Votes (Like | Disagree)

Nicole1980
No biggie. Not like we can't survive without the latest iPad for a couple months.
Score: 12 Votes (Like | Disagree)

TheDailyApple
I’m so glad I ordered within the first 10 minutes!

For those who wonder how this is worth what it is, realize that professionals pay thousands of dollars for color accurate monitors of equal or even smaller size. Using Sidecar makes this a very cost effective HDR reference monitor. Plus it has the full power of the M1 as a stand alone device. Plus it’s one of the very best drawing/illustration devices out there. Etc.

However if you have a 2018 or 2020 iPad Pro, I’ll agree that you probably shouldn’t upgrade.
Score: 10 Votes (Like | Disagree)
Read All Comments

Tuesday May 11, 2021 11:56 am PDT by Joe Rossignol
Last month, Apple introduced a new iPad Pro with the same M1 chip found in the latest Macs, and early benchmark results indicate that the M1 iPad Pro is over 50% faster than the previous-generation iPad Pro. Based on five legitimate Geekbench 5 results (here's the fifth) for the fifth-generation 12.9-inch iPad Pro with the M1 chip, the device has average single-core and multi-core scores of...
Read Full Article • 338 comments