Apple today released watchOS 7.4, the fourth major update to the watchOS 7 operating system that was released in September 2020. watchOS 7.4 comes three months after watchOS 7.3, an update that introduced a new watch face, a Time to Walk feature, and expanded ECG availability. 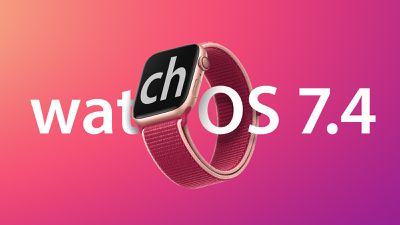 ‌‌The watchOS 7.4 update‌‌ can be downloaded for free through the dedicated Apple Watch app on the iPhone by going to General > Software Update. To install the new software, the Apple Watch needs to have at least 50 percent battery, it needs to be placed on a charger, and it needs to be in range of the ‌‌‌‌‌‌‌iPhone‌‌‌‌‌‌‌.

Paired with iOS 14.5, watchOS 7.4 brings a new "Unlock with Apple Watch" feature that lets an ‌iPhone‌ with Face ID use an unlocked and authenticated Apple Watch as a secondary authentication measure when you're wearing a mask, alleviating the need to enter a passcode to unlock the ‌iPhone‌.

Because ‌Face ID‌ does not work when wearing a mask, it can be a hassle to use an ‌iPhone‌ with a mask on. The new Apple Watch feature provides an easy but still secure way to access the ‌iPhone‌ without hassling with a passcode. It's almost identical to unlocking on Mac and can be enabled in the Settings app under ‌Face ID‌ & Passcode.

An unlocked Apple Watch paired with ‌Face ID‌ can unlock the ‌iPhone‌ when a mask is worn, but the entire face cannot be covered and the eyes still need to be visible. Apple Watch mask authentication can't be used for Apple Pay or App Store purchases, nor can it be used to unlock apps that require a ‌Face ID‌ scan. In these situations, the mask will need to be removed or a passcode/password will need to be used instead.

For Apple Fitness+ users, the watchOS 7.4 update enables AirPlay 2 for Apple Fitness+, so workouts can be streamed to an ‌AirPlay‌ 2-enabled TV or set-top box. Apple Watch metrics do not show up on the screen when AirPlayed, however, and that feature is limited to ‌iPhone‌/iPad/Apple TV.

watchOS 7.4 introduces an option to choose a Bluetooth device type in settings to correctly identify audio notifications, and it introduces ECG support and irregular heart rhythm notifications in Australia and Vietnam. Apple's full release notes with additional features are listed below:

More information on the watchOS 7 operating system that runs on modern Apple Watch models can be found in our watchOS 7 roundup.

javanate
Time to wipe and reset my watch again :( Series 3 doesn't have room for updates
Score: 14 Votes (Like | Disagree)

Time to wipe and reset my watch again :( Series 3 doesn't have room for updates

It’s really sad how poorly the Series 3 has aged. If only I waited one more year to get a watch I would’ve gone with the SE.
Score: 6 Votes (Like | Disagree)

beermode
Annoying to have the Series 3. Perfectly stable and useful, only hampered during upgrade time. Like it's some sort of psy ops to see if I get annoyed into buying a newer model.
Score: 5 Votes (Like | Disagree)

It’s really sad how poorly the Series 3 has aged. If only I waited one more year to get a watch I would’ve gone with the SE.

And this update is even worse, now my Series 3 needs THREE gigabytes of free space instead of the 2,5GB of the previous update (that i skipped!).
Score: 2 Votes (Like | Disagree)
Read All Comments