Apple is preparing to release a third-generation Apple Pencil, according to a leaker on the Chinese social networking platform Weibo, suggesting it could conceivably appear alongside new iPads at Apple's upcoming "Spring Loaded" April event. 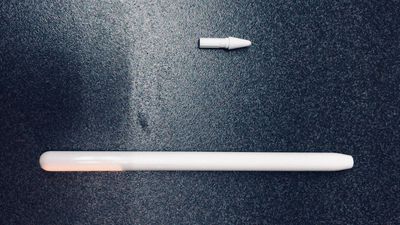 Image via Mr White.
The claim comes from Weibo account "Uncle Pan Pan," which doesn't have much of a track record for sharing accurate Apple information, although it was first to share images that allegedly showcase new colors for Apple's 2021 spring iPhone 12 case collection.

While the latest claim should be taken with a grain of salt, it does hark back to an image shared last month by a proven leaker that allegedly shows a third-generation ‌Apple Pencil‌.

Besides looking glossy, the input device shown in the image looks very similar to the current, second-generation ‌‌Apple Pencil‌‌, which was introduced with the 2018 iPad Pro. The second-gen device is shorter than the original version and charges inductively.

The ‌Apple Pencil‌ depicted also appears to have a considerably larger tip component than in existing versions, with a much longer section that screws into the ‌‌Apple Pencil‌‌ itself, possibly hinting at new technology to support additional features or provide greater drawing accuracy.

Apple still sells the first-generation ‌Apple Pencil‌, mainly to appeal to eighth-gen iPad and iPad mini 5 owners, since the second-gen version only works with the ‌iPad Pro‌ and iPad Air. An ‌Apple Pencil‌ 3 could theoretically bring new functions exclusive to Apple's next high-end ‌iPad Pro‌.

Apple is expected to use its April 20 event to unveil a new 11-inch and 12.9-inch ‌iPad Pro‌, with the higher-end model featuring a brand new mini-LED display. Well-connected Bloomberg journalist Mark Gurman believes that these new iPads will be an "iterative update" to the ‌iPad‌ line.

In today's Weibo post, "Uncle Pan Pan" also shared an image allegedly showing AirPods 3, although Apple isn't expected to launch the third iteration of AirPods until the third quarter of this year, which would rule them out of Apple's April event.

Coleco
How about simplifying this craziness and just having one pencil to rule them all? Would be nice if the new one was a universal $99 replacement that worked with all iPads going forward (backward compatibility with pencil 1 and 2 devices would be a bonus).
Score: 21 Votes (Like | Disagree)

contacos
Back to glossy finish? I prefer the 2nd gen. It actually looks like a proper pencil
Score: 16 Votes (Like | Disagree)

CTHarrryH
Gee my 2nd generation pencil works with my current generation AIR so article saying only works with Pro is wrong
Score: 12 Votes (Like | Disagree)

madmin
Trust Apple to put LED in your pencil
Score: 8 Votes (Like | Disagree)

mi7chy
Should be bundled for free with the iPad Pro.
Score: 7 Votes (Like | Disagree)
Read All Comments