Spotify is expanding on its Daily Mix concept by rolling out three new mixes that aim to be increasingly personalized and which evolve over time, offering users more recommendations to choose from based on their mood and interest. 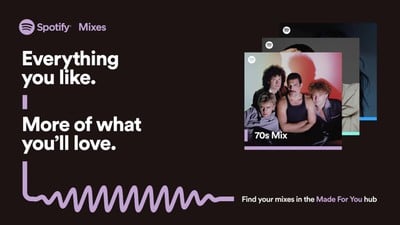 The new personalized mixes are called Artist Mix, Genre Mix, and Decade Mix. All three start with music that users have been listening to, and are then updated over time with songs chosen by the service's algorithms, based on the user's listening habits.

According to Spotify, each mix category will have several playlists featuring artists, genres, and decades that are listened to often. "They're rooted in familiarity, meaning that you won't just hear your favorite artists, but your favorite songs from those artists," explained the company in its press release.

Then, we supplement by adding in songs we think you'll love, meaning they'll be filled with the music you have on repeat alongside some fresh picks. So whether you want to jam out to a specific artist or hear more music from another decade, there's a mix just for you.

The new mixes are rolling out to both Free and Premium users globally, and can be found within "Search" in the "Made For You" hub.

Spotify last week overhauled its desktop app and web player with an "improved look and feel" that offers design parity and also makes both the app and the web experience easier to use.

The streaming service also recently added a new History icon to the top of the Home hub, as well as a new section of tiles showing new and relevant podcast episodes.

I find Apple Music mixes and playlists to be vastly superior to Sportify.

I found the opposite. I tried Apple Music for a year and had to switch back to Spotify. Apple Music would recommend stuff I've already heard or stuff that was really popular (if it's really popular I'll find it, no need to recommend it.) Spotify does a good job of finding new music and artists I have not heard before. That's what I want out of playlists.
Score: 8 Votes (Like | Disagree)

I tried Spotify a few years back. Every few months, albums would silently disappear for licensing reasons. After 12 months, half my music had vanished.

Happens to me with Apple Music all the time. Licensing sucks
Score: 3 Votes (Like | Disagree)

I tried Spotify a few years back. Every few months, albums would silently disappear for licensing reasons. After 12 months, half my music had vanished.

Half of your music? You must have been really unlucky. Albums on Spotify disappear here and there, but it's a sporadic event.
Score: 3 Votes (Like | Disagree)

Maybe Apple Music should try and be a bit more like Spotify then, based on the comments on this thread.

This stuff isn't new - Pandora has had similar features for the better part of a decade. All we're seeing is iterations of the same discovery algorithms every media platform has adopted over the last decade.
Score: 3 Votes (Like | Disagree)

PaulAllen/
I really enjoy Spotify. These curated playlists are personally what I enjoy the most. They do need to completely overhaul their podcast UI though. Absolutely horrendous.
Score: 2 Votes (Like | Disagree)

Bug-Creator
Well, obvious ? for the picture used even if it's from the 80s.
Score: 1 Votes (Like | Disagree)
Read All Comments

Tuesday May 25, 2021 8:50 am PDT by Joe Rossignol
Tidal this week released an Apple Watch app, allowing subscribers to stream music and control playback directly on their wrist, without an iPhone nearby. The app is available through the App Store on watchOS. Tidal on the Apple Watch provides access to tracks, albums, playlists, and downloaded content that can be listened to offline from anywhere without internet connectivity. Apple Music...
Read Full Article • 57 comments

Wednesday June 2, 2021 8:41 am PDT by Mitchel Broussard
Spotify today announced a new collaborative playlist and a collection of new stat tracking features for users. The company is referring to the stat tracking updates, called "Only You," as a way to see your Spotify Wrapped stats earlier in the year. In total, there are six new ways to break down your Spotify listening history, including finding out which artist most aligns with your...
Read Full Article • 17 comments

Apple Music Renaming 'Get Up! Mix' to 'Workout Mix'

Monday September 28, 2020 6:27 am PDT by Mitchel Broussard
Apple Music is rolling out a small update to its latest weekly playlist, renaming the "Get Up! Mix" to simply "Workout Mix" (via MacStories' John Voorhees). Apple launched the "Get Up! Mix" in March 2020, boosting the weekly curated playlist count to five, including "Favorites Mix," "Friends Mix," "New Music Mix," and "Chill Mix." The "Get Up! Mix" was built around curating a collection of...
Read Full Article • 30 comments