As expected, Microsoft today discontinued its Cortana mobile app. As a result, the company has ended all support for third-party Cortana skills and eliminated the Cortana app for iOS and Android devices. 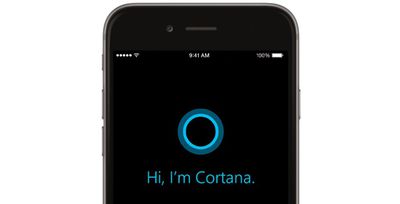 For those unfamiliar with Cortana, it is Microsoft's version of Siri or Alexa, an AI-based personal assistant that can answer questions and complete small tasks. The eponymous mobile app was originally launched in November 2018, but apparently never gained a user base big enough in its short lifetime for Microsoft to consider it worth maintaining.

As explained in a Microsoft support page, from today, March 31, the mobile app is no longer supported, and reminders and lists are no longer available within the app either, although they can still be accessed through Cortana in Windows. Also, Cortana reminders, lists, and tasks are automatically synced to the Microsoft To Do app, which is available as a free download on iOS and Android.

The planned shutdown of the apps was announced in July 2020, when Microsoft said it would be shifting toward a "transformational AI-powered assistant experience" in its Microsoft 365 apps, which would involve refocusing its "areas of innovation and development."

The company has since improved Cortana's integration in Microsoft 365, such as introducing personalized, actionable briefs in Outlook for Exchange users, and adding Cortana to the Teams mobile app to do things like manage calendars, email, and join meetings.

In January 2021, Microsoft ended support for the Cortana integration in the Harman Kardon Invoke speaker, and created a Bluetooth-enabled device transition plan for Invoke owners to be able to continue listening to their favorite music, podcasts, and radio stations. In addition, speaker owners who used Cortana are also eligible for a $50 Microsoft gift card, which is redeemable up to July 31, 2021.

MarkPL
That's really going to upset both people that use it...
Score: 53 Votes (Like | Disagree)

In addition, speaker owners who used Cortana are also eligible for a $50 Microsoft gift card, which is redeemable up to July 31, 2021.

Great I’ll use it to buy that Windows phone that I always wanted! Or maybe a Zune ?
Score: 18 Votes (Like | Disagree)

The planned shutdown of the apps was announced in July 2020 ('https://www.macrumors.com/2020/07/31/microsoft-cortana-ios-shutting-down/'), when Microsoft said it would be shifting toward a "transformational AI-powered assistant experience" in its Microsoft 365 apps, which would involve refocusing its "areas of innovation and development."

they're bring back Clippy aren't they?
Score: 14 Votes (Like | Disagree)

williamyun7
Please do the same thing in windows too?
Score: 10 Votes (Like | Disagree)

Mark and 30 others
Hi Cortana. You can go ahead and have a seat right there next to Zune and Windows phone. We will be with you... never
Score: 7 Votes (Like | Disagree)

Mutepointer
In other words, they didn’t obtain too much information from data harvesting from those devices. Now fully shut it down from pc’s as well.
Score: 7 Votes (Like | Disagree)
Read All Comments