A prototype Leica camera designed by former Apple designers Sir Jony Ive and Marc Newson is heading to auction in June (via The Verge). 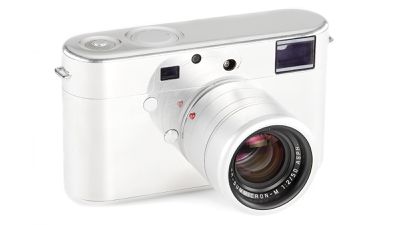 The camera prototype features many of the subtle industrial design cues Ive and Newson are known for, particularly on their Apple products. The exterior is also made of Ive's preferred lightweight material, aluminum. While the camera is not directly affiliated with Apple, it is clear to see the selective curves, polished finishes, and minimalism that have become synonymous with Apple's product designs.

The prototype Leica camera was produced during the development of a one-off Product (RED) Leica M that was sold at a charity auction in 2013 for $1.8 million. A total of 561 models and nearly 1,000 prototype parts were made during the camera's design process.

Ive and Newson teamed up to create a range of products for the Product (RED) auction, including an aluminum desk, a striking red Mac Pro, and a set of solid gold EarPods, among other items.

A year after the auction, Newson joined Ive at Apple and became responsible for the design of the Apple Watch, having previously worked for wristwatch manufacturer Ikepod.

Both Ive and Newson departed Apple in 2019 to found the design company LoveFrom. Apple has said in the past that it was LoveFrom's first client and that Ive and Newson are still "very involved."

The camera is said to be from the "final development step" of the design process and comes with a matching Apo-Summicron 2/50 mm ASPH lens. The device, described as being in "B+" condition, has a starting price of around $118,000. It is estimated to reach between $235,000 and $295,000 in bidding.

Apple has not produced a dedicated camera since it released the 0.3 Mpx Apple QuickTake in 1994, but the prototype Leica may give the best glimpse yet of what a modern Apple camera could look like today.

zachdog
This camera is an example of everything that went wrong with Apple after Steve Jobs died. The buttons are useless because the markings are removed. Minimalist design might appear to be beautiful, but in this case renders the product nearly useless. For comparison, here are a few well-known product “features” of Apple products directly influenced by this form-over-function philosophy:

* Removal of useful UI indicators, buttons and menu items in Big Sur (file proxy icons and search/filtering in Mail.app are big ones)
* Removal of the hardware charging state indicator
* Removal of the iPad mute/orientation switch
Score: 10 Votes (Like | Disagree)

Eightarmedpet
Love it.
Super clean and minimal UI to the extent it renders it useless.
Ive is a terrible interface designer (not that I don't genuinely love his item design).
Score: 9 Votes (Like | Disagree)

Mike_Trivisonno
Looks like something you would buy at IKEA. Minimalism is a boring. Mid Century Modern, Art Deco, and Art Nouveau are so much more expressive.
Score: 7 Votes (Like | Disagree)
Read All Comments