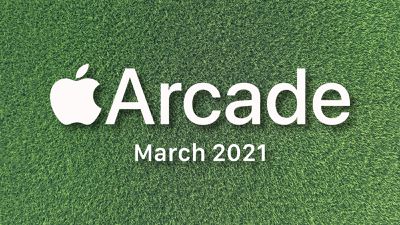 SP!NG was the first new game to arrive on ‌Apple Arcade‌ this month, offering a simple one-touch game based on avoidance.

SP!NG comes from SMG Studios, developer of the ‌Apple Arcade‌ Game "No Way Home." SP!NG encourages players to swing through levels to collect jewels and aim for a perfect score. Each level involves a start and end port with anchor points to spin around in order to reach the destination.

Welcome to Cozy Grove, a life-sim game about camping on a haunted, ever-changing island. As a Spirit Scout, you'll wander the island's forest each day, finding new hidden secrets and helping soothe the local ghosts. With a little time and a lot of crafting, you'll bring color and joy back to Cozy Grove!

With a relaxing soundtrack, a hand-drawn aesthetic, and landscapes that come alive when helping a spirit in need, Cozy Grove aims to provide a comforting and unique atmosphere.

The game features dozens of characters in an extensive and unusual story that is able to last for many hours of gameplay. Players can collect spirit animals, craft decorations, go fishing, and more.

HitchHiker is a road-trip mystery adventure game about exploring the unknown in order to find yourself. Set along lost highways, players need to solve the puzzle of their own backstory.

As a hitchhiker with no memory or destination, you catch a series of rides across a strange and beautiful landscape, tracking the mysterious disappearance of a person close to you. Your drivers range from stoic farmers to off-duty waitresses, and each one has a story to tell. Clues appear, alliances emerge, and nothing is quite what it seems.

As the player's journey progresses, they must decode the events of the past while confronting the dangers that lie ahead.

HitchHiker spans a "strange and beautiful landscape" in five rides with five strangers, each providing new insights on the mystery of the protagonist's mysterious backstory. The game features environment-based puzzles and interaction choices that can reveal new secrets.

Farm It! involves mini-games, such as animal farming or fishing, to get resources to build and decorate a farm.

Players can sell their collected resources to customize their character and decorate different rooms in their farm-house. Accompanied by an animal friend, players take part in a wide range of farming activities such as selecting seeds and harvesting crops.

There are two new games slated to arrive on ‌Apple Arcade‌ soon in the role-playing and adventure genres.

"Fantasian" comes from the makers of the popular video game series "Final Fantasy," and is set against a backdrop made from over 150 handmade dioramas that blend physical environments with 3D characters. Players assume the role of "Leo," who awakens to find himself lost in a strange land with only one remaining memory.

"Wonderbox" is an action-adventure multiplayer game. Players can engage in pre-set adventures filled with challenges, enemies, puzzles, and platforms, or construct their own in Creator Mode. The game revolves around "boxes" used to form a deep chain of interconnected environments.

SP!NG, Cozy Grove, HitchHiker, and Farm It! are available on the App Store now. Keep an eye out throughout April for more new games.

‌Apple Arcade‌ is priced at $4.99 per month with a one-month free trial available to test it out. Apple also has a one-year subscription option available for $49.99 per year, a savings of $9.89 over the monthly price, and it is also available as part of all tiers of Apple One, starting at $14.95 per month.

Isengardtom
Given the time to grow Arcade can become really good.
Score: 4 Votes (Like | Disagree)

nwcs
I’ve been enjoying Spire Blast lately. Although there’s a bug preventing anyone from completing the 139 level. Hopefully fixed soon. Arcade is just what I kind of prefer - easy and casual games. I’d love for more simple arcade and puzzle games to show up. Wish Galaga original would show up...
Score: 3 Votes (Like | Disagree)

I can’t believe that someone at Apple is delusional enough to think that Arcade is competing with Xbox Gamepass. One is mobile trash, the other is chock full of actual AAA titles.

When did they outright say they were competing with them?

They offer games for the causal gamer - like me who has a job and two kids and limited spare time to invest heavily into games. I can play 30 minute before bed or while on a short lunch break and enjoy it.

And I’m a guy who spent his teen years connected to a NES - I grew out of hardcore gaming.


The selection is improving and I’m nowhere near trying out the 150+ games.
Score: 2 Votes (Like | Disagree)

peglegjack
Sping and Hitchhiker are freakin amazing. Haven’t played Cozy Grove but it looks cool if you’re into games like Animal Crossing
Score: 2 Votes (Like | Disagree)

alex2792
I can’t believe that someone at Apple is delusional enough to think that Arcade is competing with Xbox Gamepass. One is mobile trash, the other is chock full of actual AAA titles.
Score: 1 Votes (Like | Disagree)

oosamon
I'm glad to subscribe to Arcade. Even so, it would be great to have more AAA content on :apple: devices.
Score: 1 Votes (Like | Disagree)
Read All Comments

'Reigns: Beyond' and 'All of You' Released on Apple Arcade

Friday November 6, 2020 7:41 am PST by Hartley Charlton
Apple Arcade has today gained two new games: "Reigns: Beyond" and "All of You." Reigns: Beyond is the fourth game in the popular Reigns series from Nerial and Devolver Digital, and takes the decision-based game to space. As an intergalactic indie rockband, plot your rise to "stardom", traveling from planet to planet and gig to gig on your quest for fame and fortune. Play local (and...
Read Full Article • 12 comments

Friday January 22, 2021 8:37 am PST by Hartley Charlton
"NUTS - A Surveillance Mystery" and "Spire Blast" are the latest games to join Apple Arcade's expanding library. NUTS is a single-player surveillance mystery game set in a remote forest, where players are tasked with discovering what a group of squirrels are hiding. Through carefully laying out equipment, recording the squirrels' movements, analyzing their behavior, and reporting...
Read Full Article • 24 comments

Friday October 2, 2020 12:25 am PDT by Tim Hardwick
New adventure game "Slash Quest!" landed today on Apple Arcade. Made by Green Pillow and Noodlecake Games, the title promises players plenty of "enemy chopping, puzzle solving, door unlocking, river crossing, fire setting, gear spinning," and more. The Queen's evergrowing talking sword is lost in a faraway land. Luckily you showed up to wield it back to the castle. You do know how to swing a ...
Read Full Article • 9 comments

Thursday August 27, 2020 5:59 am PDT by Hartley Charlton
New adventure game "The Last Campfire" has arrived on Apple Arcade. The title comes from Hello Games, creators of "No Man's Sky," and tells the story of "a lost ember trapped in a puzzling place, searching for meaning and a way home." The game follows the journey through wilderness "filled with lost folk, strange creatures, and mysterious ruins," in the hope of lighting the last campfire....
Read Full Article • 41 comments