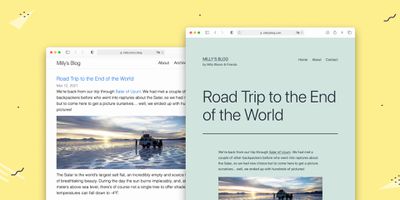 As well as providing a focused writing environment, Ulysses offers ways to publish texts from within the app to various blogging platforms. Version 22 adds the ability to publish to Micro.blog, a social network for independent microblogs.

"Micro.blog offers a compelling alternative to the prominent social networks. People are in control of their content and can interact while there are no algorithms and ads. It's an independent platform with an awesome concept, and we're proud to have them," explains Marcus Fehn, Ulysses co-founder and creative head of the company.

The new Ulysses version also improves publishing to WordPress. Users can now update previously published posts from within Ulysses — to fix typos after an article has already gone live, for example. The developers have also updated Ulysses' preview theme to the new WordPress default Twenty Twenty-One, and generally improved the integration of the two apps.

In addition, Ulysses 22 increases the customizations available to users who want to personalize the look of their writing environment. There's a new option to choose colors for group icons (groups are used to organize texts, similar to Finder folders).

Meanwhile, headings can now be displayed in a larger size in the editor to make them easier to distinguish from the rest of the text. The latter is dependent on the editor theme, where the heading size can be fine-tuned. Ulysses 22 also ships with a new default theme that has larger headings in place.

In other improvements, Ulysses for iOS now remembers the scroll position when switching between several documents, while on iPad, a new setting has been added to keep the keyboard open in this situation.

Ulysses can be downloaded for free on the App Store and the Mac App Store, with version 22 rolling out to existing users today. After a 14-day trial period, a subscription is required to unlock the app on all devices. A monthly subscription costs $5.99, while a yearly subscription is $49.99.

Students can use Ulysses at a discounted price of $10.99 per six months. The discount is granted from within the app. Ulysses is also included in Setapp, the subscription-based service for Mac applications created by MacPaw.

IggyZuk
Still not worth it due to the subscription model, especially when iA writer exists.
Score: 14 Votes (Like | Disagree)

Cyprusian
Software eventually becomes unaffordable if every product is sold on a subscription basis. If I was in the market for a writing app, I would go for the excellent Scrivener which has a one-off price.
Score: 8 Votes (Like | Disagree)

AlexanderUK
I used to use Ulysses until they went subscription to which I put in an email request asking if they were going to add table support for markdown (as it's something pretty basic that they were missing) - amongst other features, as I often need to add tables into my documents. I got an email response within 48 hours cheerfully responding that they had it on their urgent todo list - I said once it's added I would commit to a subscription as currently there was no workaround (their advice was to purchase Marked, another app - not iOS compatible, which cost at the time £20 just to plug the holes in their product).

I moved over to IA writer which took some getting used to but worked much the same (I couldn't use Scrivener because while it's overall a better product, it's iOS app is lacking in feature parity and the developer has said he's got no intention of making them equal for stuff like ePub export).

As for Ulysses, it's been many years - and they still haven't bothered to add table support - or anything else markdown related - or anything else remotely useful. They have however redesigned their app 4 times, added third party service support (which requires little coding as the third party did the hard work) - and they increased the subscription price twice. So long story short, Ulysses is useless as a multi-markdown editor, it's glorified eye candy, and all the "team" behind it are interested in are making "app of the year" or "featured app" in the store because they are better at marketing than actually producing a quality product. And I say this as a software developer of 30 years and web developer of 20 years. I've also authored multiple books (on web development) through large publishing houses using such apps if it provides credibility to my claims.
Score: 5 Votes (Like | Disagree)

Scott Robinson
Ulysses has got me through 5 years of a PhD. The interface and syncing are flawless (for me). For some people subscriptions models work. I have no issue paying for something that makes my life infinitely easier. Some people have mentioned Scrivener. I used it for many years but found the exporting Unfriendly albeit powerful and its iOS app perfectly usable but not as seamless as Ulysses. Moving to Ulysses has made me more productive. I can use Pandoc to export Indesign compatible inCopy files and get layout ready chapters in a few clicks And benefit from (IMO) the most pleasant writing UX on iOS.
Score: 5 Votes (Like | Disagree)

Ah yes, I came for the myriad complaints about the subscription offering that has absolutely nothing to do with the blog piece, posted by folks who already spend lots of money on various subscription services but zero in this particular one as being beyond the pale.

Your post has nothing to do with the blog piece either. If you want to call out people, walk the walk.
Score: 5 Votes (Like | Disagree)

macsareveryinteresting
I think I’ll stick with a different app. It’s a little too expensive right now.
Score: 5 Votes (Like | Disagree)
Read All Comments