Adobe is rolling out a Photoshop update to bring native support for Apple Silicon, promising users 1.5x faster performance than running the software via Rosetta emulation. 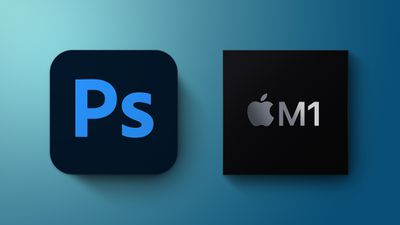 While Photoshop will run natively on M1 Macs, there are some caveats. Users will have the ability to run Photoshop as a native ‌Apple Silicon‌ app or under Rosetta emulation. Under native mode, however, certain features will not be available. Adobe says that the ability to import, export, and playback embedded video players is not supported under ‌Apple Silicon‌, and other features such as preset syncing, shake reduction filter, and the "Share an image" button don't currently work.

Update: Blackmagic Design's DaVinci Resolve has also been updated to version 17.1 with ‌Apple Silicon‌ support, as noted by The 8-Bit.

Just looking at that version number, so much history around Adobe Photoshop on MacOS. Good it’s been updated to support M1 based macs now.

I'm old enough to remember my first job working for Apple in 1989 and a floppy disk from Adobe (those Postscript and font folks) showed up for this program called Photoshop 1.0 beta. All of a sudden, the color capable Mac II got really interesting.
Score: 17 Votes (Like | Disagree)

If that was the case you’d think they’d focus on that comparison. Makes me wonder if Adobe have done a lazy job with the port.

Adobe possibly doing a lazy job with a port?!? I’m shocked, I tell you, just shocked!!!

How about a comparison with x86?

It is embarassing for x86
Score: 9 Votes (Like | Disagree)

MacGizmo
I'm not sure everyone quite understands just how much faster "1.5X faster" is.

That being said, I've lost faith in Adobe's ability to release coherent, stable, and useful software years ago — primarily due to the shocking mess that is InDesign. I love ID, and I use it all day, every day. But the amount of bugs and oversights it adds with every update is only rivaled by the lack of useful new features. It is by-far the most crash-prone app I've had in over a decade. In fact, if you asked me what the second-most crash-prone app I have is, I couldn't tell you... other than it's probably another Adobe app like Illustrator or Acrobat.

What's most amazing is that Photoshop, for the most part, is the oldest app Adobe offers and has (probably) the most legacy code and support of any of their apps, yet it is the only one that is fast, stable and rarely crashes/freezes for me despite the fact that the file sizes I deal with in PS are massive compared to any other app I've ever used.
Score: 8 Votes (Like | Disagree)

Michael Scrip
In similar news... DaVinci Resolve version 17.1 has come out of beta and includes:

This is getting to be very exciting...

ricardocosta
Tested it out on the M1 MacBook Pro and the launch time is insanely quick.
Score: 5 Votes (Like | Disagree)
Read All Comments

Tuesday October 26, 2021 6:00 am PDT by Juli Clover
Adobe hosts an annual MAX conference each year to unveil new features for its Creative Cloud apps, and this year's event will see Adobe introducing updates for Photoshop, Illustrator, Lightroom, and more. Photoshop On the desktop, Photoshop is gaining an improved Object Selection Tool that lets users hover over the image that they want to select and then execute the selection with a click....
Read Full Article • 58 comments

Deals: New Sales Include OtterBox's 20% Off Sitewide Event and Nearly 70% Off Adobe Creative Cloud for Students/Teachers

Thursday August 19, 2021 6:51 am PDT by Mitchel Broussard
Today we're tracking a pair of deals offered by OtterBox and Adobe. At OtterBox, you'll find a 20 percent off sitewide flash sale happening today only, and at Adobe there's a special discount available for students and teachers heading into a new school year. Note: MacRumors is an affiliate partner with some of these vendors. When you click a link and make a purchase, we may receive a small...
Read Full Article • 6 comments

Monday August 16, 2021 10:39 am PDT by Juli Clover
Each year, Adobe holds an event called Adobe MAX to highlight new Adobe software releases for design and advertising professionals. Adobe MAX is normally an in-person event, but as with the 2020 event, the 2021 Adobe MAX presentation will again be digital. Adobe MAX 2021 is set to take place from Tuesday, October 26 to Thursday, October 28, and it will be a free event for all who want to...
Read Full Article • 25 comments

Saturday May 21, 2022 9:00 am PDT by Hartley Charlton
With around four months to go before Apple is expected to unveil the iPhone 14 lineup, the overwhelming majority of rumors related to the new devices so far have focused on the iPhone 14 Pro, rather than the standard iPhone 14 – leading to questions about how different the iPhone 14 will actually be from its predecessor, the iPhone 13. The iPhone 14 Pro and iPhone 14 Pro Max are expected...
Read Full Article • 295 comments