Apple Fitness+, the latest service to join the Apple family, integrates tightly with the Apple Watch to offer a comprehensive and growing selection of workout and exercise videos made by a team of professional trainers. 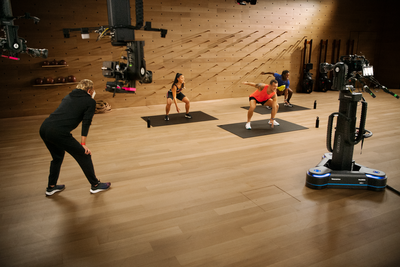 Apple curates and records all of the videos at a location in Santa Monica, California, and each video features a similar background and style. For the first time, thanks to a virtual tour by Apple given to Men's Health, we have a look inside the Fitness+ studio. The virtual tour of Apple's 23,000 square-foot studio was conducted by Apple's senior director of Fitness for Health Technologies, Jay Blahnik.

The Fitness+ studio is modern, featuring wood accents and "all-white everything," according to a read-out of the virtual tour from Men's Health. The studio entrance consists of three sliding glass doors that when opened "reveal a verdant garden." Each month, a new team member chooses a quote that's placed on a wall right outside the studio. March's quote reads, "Please be responsible for the energy you bring into this space."

Apple Fitness+ Studio Control Room (via Men's Health)
The studio itself features multiple screens scattered around the room that display a live view of what's being captured in the studio. The heart of the studio, of course, is the cameras. For recording Fitness+ videos, Apple uses seven high-end Super 35 cinematic cameras attached to robotic arms. Compared to a traditional human-controlled camera, the robotic arms help enable smoother transitions and movement. Blahnik says that the robotic arms also help the team better coordinate what's most appropriate to show the viewer during a workout.

One selling point of Fitness+ is its tight integration with the Apple Watch. During a workout, Fitness+ will send metrics from your watch live onto your display. The information helps users stay motivated, engaged, and up to date on progress toward closing their activity ring or their current heart rate, but Apple wanted to go further than just display live metrics.

In the virtual tour, Blahnik explains that the team wanted to create a dynamic and fully immersive experience. To do this, Apple had to develop unique software that would display metrics on screen at the correct time during an exercise. For example, if a trainer says "Sprint all-out for 30 seconds" during a workout, Fitness+ will display a timer for 30 seconds on the screen.

When the trainer says in a HIIT workout, 'Sprint all-out for 30 seconds,' being able to see that time is an incredible motivator," says Blahnik. "It makes for a better, more immersive workout. [Integrated, dynamic smart metrics] take it to another level compared to a typical video workout. We had to think hard about how to curate the experience, so you're not overwhelmed by metrics and animations and that those things are happening exactly when you might expect them to and in ways that are helpful.

[This] is where they ideate, collaborate, and get feedback from each other to create the best workouts... We needed trainers who are open to feedback from experts who know their stuff in that workout type, as well as fitness experts not in their space.

Apple Fitness+ Rehersal Room (via Men's Health)
Apple Fitness+ launched on December 14, making the service still relatively young. Apple adds new content across all 10 of its current workout types every week, continually expanding the catalog of exercises and workouts users have access to. Blahnik calls Apple Fitness+ a "marathon, not a sprint" and says that Apple is excited about its future and that it's "really committing to and investing" in the service.

Apple Fitness+ is available for $9.99 per month, $79.99 per year, or as part of the Premier tier of the Apple One bundle. Learn more about Fitness+ in our guide.

I wouldn’t call it a waste of money. It might have a low ROI right now - but as it becomes more popular and they improve it more people will join (more subs) and more people will buy and/or upgrade older Apple watches.
And, Tim Cook has said many times, he feels Apples legacy won’t be their phones or their computers, but the impact they have had on personal health.
Score: 11 Votes (Like | Disagree)

The fact that they are doing this in expensive California instead of out in Wyoming is a good indicator of the waste going on so execs and managers can have a beach house.

If I were shooting a fitness series Southern California would be where I would go. Looks of good-looking fit people that can act and take direction, studio facilities, camera and lighting crews, technical production support, etc. Not so much of that in Wyoming.
Score: 11 Votes (Like | Disagree)

The videos still remind me of the 80s fitness shows. lol

It is a good looking studio.

Yep. I half expected to see Jane Fonda leading the class.
Score: 10 Votes (Like | Disagree)

himanshumodi
The production values are top notch. But till they have proper structured workout schedules of programs for 30 days or 60 days, it will be hard to get on board. I am a big fan of beachbody workout programs. Even discounting the multi-level-marketing aspects of it, the workouts are solid.
Score: 9 Votes (Like | Disagree)

Apple_Robert
The videos still remind me of the 80s fitness shows. lol

It is a good looking studio.
Score: 9 Votes (Like | Disagree)

rmoliv
I hate it that they always have a grin on their faces. So unnatural...
Score: 9 Votes (Like | Disagree)
Read All Comments