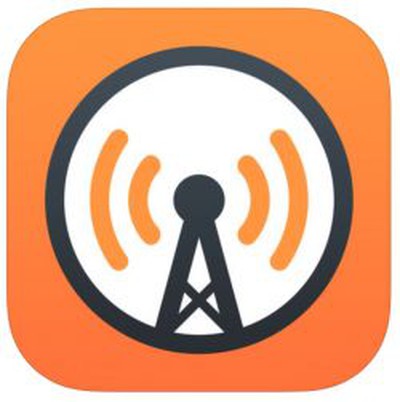 In the latest update to the popular podcast player, Overcast has overhauled its Apple Watch app to be more intuitive and bring several features that were previously only accessible on Overcast for iPhone.

The newly designed watch interface ditches the horizontally scrolling panels to reveal features, and instead uses a single screen providing button access to settings, podcast library, and now playing controls. In addition, a sync button keeps podcasts stored on your watch in sync with those on your ‌iPhone‌.

The new playback controls include the ability to skip podcast chapters (if a podcast supports them) and adjust playback speed. These can be accessed by tapping a button in the bottom-right corner of the now playing screen.

Above, the old Overcast watch interface
Version 2021.1 of the app also includes improved Siri support and "tons of under-the-hood improvements and bug fixes," although as a result of the changes, this update drops support for watchOS 6, meaning the app will no longer work on Apple Watch Series 1 and Apple Watch Series 2.

Above, the new 2021 Overcast watch interface
Overcast 2021.1 is available for ‌iPhone‌ and iPad from the App Store in the form of an ad-supported free version or $9.99 per year ad-free. [Direct Link]
Tags: Overcast, Marco Arment
[ 64 comments ]

Also, the "indie dev" has more money than he knows what to do with. The idea this is some "poor indie" is absurd.

Does his wealth offend you? It's a solid podcast app.
Score: 9 Votes (Like | Disagree)

Also, the "indie dev" has more money than he knows what to do with. The idea this is some "poor indie" is absurd.

No one said "poor indie". Indie dev just means independent, which he is.

Yes, he's had a very successful career and likely doesn't need any of the money he makes off of Overcast, but that has nothing to do with any of this.

And yes, Marco can be a bit of a whiner, but there's a very easy fix for that—just stop listening to him. It's really that easy.
Score: 9 Votes (Like | Disagree)

Canyda
All I know is that a couple of weeks ago Overcast suddenly stopped downloading a password protected podcast feed to which I subscribed and I emailed Marco and explained what was happening and he immediately implemented a server-side fix and everything immediately went back to normal.

I appreciate that kind of customer service.
Score: 8 Votes (Like | Disagree)

CJM
Marco sure has complained about doing the Watch UI for a while. Guess he finally got his head around it.
Score: 8 Votes (Like | Disagree)

yellow8
The maker is an indie dev! Support him :)
Score: 7 Votes (Like | Disagree)

No one said "poor indie". Indie dev just means independent, which he is.

Yes, he's had a very successful career and likely doesn't need any of the money he makes off of Overcast, but that has nothing to do with any of this.

And yes, Marco can be a bit of a whiner, but there's a very easy fix for that—just stop listening to him. It's really that easy.

Exactly. I enjoy ATP for the most part and am also sometimes put off by Marco’s whining but applaud anyone who’s been able to build a solid career as an indie developer against the litany of mega corps playing in the same space.
Score: 7 Votes (Like | Disagree)
Read All Comments

Wednesday June 23, 2021 5:07 am PDT by Sami Fathi
Apple earlier today published a detailed report outlining in blatant terms the negative impact that sideloading would have on the iPhone and iPad, specifically calling out the impacts it would have on user privacy and security. Now, the company is continuing its PR push, with an executive noting in an interview that users who wish to sideload apps already have that option thanks to other...
Read Full Article • 353 comments