The University Health Network today announced the launch of a new study that will aim to find out how the Apple Watch can help with the early identification of heart failure progression. 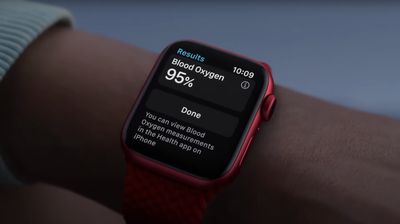 Cardiologist Dr. Heather Ross is teaming up with Apple to compare data collected by the Apple Watch to data routinely collected from the physical tests heart failure patients undergo. The study will determine whether the health sensors and features in the Apple Watch, including the Blood Oxygen app and mobility metrics, can provide early warning signs, and whether patients can perform traditionally clinic-based assessments in their own homes.

Patients from the Peter Munk Cardiac Centre will be asked to participate in a three month active monitoring study, with each patient using an iPhone and an Apple Watch Series 6, which is the Apple Watch model that offers the Blood Oxygen app.

Apple's vice president of Health, Sumbul Desai, said that studies like this and heart health insights have an important role in the evolution of the Apple Watch.

"Surfacing heart health insights has played a key role in the evolution of Apple Watch and we're continually humbled by the responses we hear from users on the impact it has had on their lives," says Dr. Sumbul Desai, Apple's vice president of Health. "We're thrilled to be collaborating with UHN and Dr. Heather Ross to better understand how the powerful sensors in Apple Watch can potentially help patients better manage heart failure, from the comfort of their own home."

Dr. Ross, who is leading the study, said that she believes that biometric data from the Apple Watch "may provide comparable, precise, and accurate measurements of fitness, prognostic markers and early warning signals, compared to traditional diagnostics."

The Apple Watch has been the subject of multiple heart-related studies in the past, including a study Apple did in partnership with Stanford Medicine to determine whether the Apple Watch can detect atrial fibrillation.

The study determined that the Apple Watch can indeed detect irregular heart rhythms, and the Apple Watch has a built-in feature in many countries that allows it to alert wearers when an abnormal heart rhythm is detected. Other Apple Watch-related studies are under way, focusing on asthma, heart failure, early detection of COVID-19, and cognitive decline.

You’re reading about one.

“University Health Network” and the Peter Munk cardiac center are in Toronto, Canada.

UHN is a group of hospitals in Toronto. The “University” in the name is not as in a school. It’s referring to that a bunch of the hospitals in the network is on a street named “University Avenue”.
Score: 5 Votes (Like | Disagree)

alexandr
very interested to see what they will find. early detection of a heart condition is one of the best things you can give yourself.
Score: 5 Votes (Like | Disagree)

Apple has more influence and trust from US health authorities. Each country have their own set of criteria and standards so trying to conform to all of those at once is an impossibility and would take decades to undergo. Science works by establishing a theory in practice and building upon that. Once American scientists and doctors can prove the viability of a study, it would be quickly adopted by all other countries willing to adjust their criteria to match that of Apple’s. It’s not too different from the international supply chain that Apple has established for their own products except that one works in reverse.
Score: 3 Votes (Like | Disagree)

This one is in Canada, so there’s that.
Score: 2 Votes (Like | Disagree)

kyjaotkb
I don’t think I have heard of any studies using Healthkit / Apple Watch available outside the US. Am I wrong?
Score: 1 Votes (Like | Disagree)

Maybe there is something with international law maybe preventing Apple from expanding Healthkit research?
Score: 1 Votes (Like | Disagree)
Read All Comments