Consumer spending on the top 100 non-game subscription-based apps across mobile platforms grew 34% year-on-year from $9.7 billion in 2019 to $13 billion in 2020, according to a new report by analytics firm Sensor Tower. 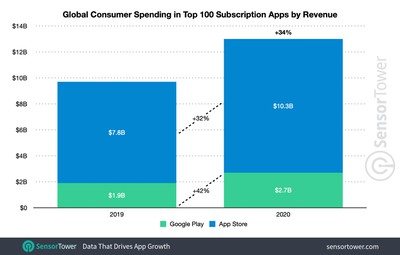 According to the data, revenue from subscription apps purchased on the App Store and the Google Play Store represented around 11.7% of the $111 billion that consumers spent on in-app purchases last year, the same share as in 2019. In the fourth quarter of 2020, however, 86 of the top 100 earning non-game apps worldwide offered subscriptions, which is actually down slightly from 89 in the same quarter of 2019.

Reflecting a wider historical trend, spending on subscription-based apps in Apple's ‌App Store‌ was vastly more than in the Google Play Store:

Consumers have historically spent more on the ‌App Store‌ than on Google's marketplace, and the same holds true for subscription apps. Globally, the top 100 subscription apps on the ‌App Store‌ generated $10.3 billion in 2020, up 32 percent from $7.8 billion the previous year. The cohort of 100 top earners on Google Play saw $2.7 billion last year, up 42 percent Y/Y from $1.9 billion in 2019.

The only performance indicator in which the Google Play Store beat the ‌App Store‌ was in terms of year-on-year growth for U.S. user spending on subscription apps.

Looking at the U.S. ‌App Store‌, consumers spent $4.5 billion in 2020 on the top 100 earning non-game apps offering subscriptions, up 25 percent from approximately $3.6 billion in 2019. While the top 100 earning subscription apps on Google Play did not generate as much revenue, they did see greater Y/Y growth. In 2020, the top Google Play subscription apps in the U.S. saw $1.4 billion spent, up 40 percent Y/Y from $1 billion.

Despite the numbers, the subscription apps generally divide ‌App Store‌ users between those for and against the revenue model. Apple began incentivizing developers to sell their apps for a recurring fee instead of a one-time cost when it made changes to its ‌‌App Store‌‌ subscription policies in 2016. Usually, Apple takes 30 percent of app revenue, but developers who are able to maintain a subscription with a customer longer than a year see Apple's cut drop down to 15 percent.

Attractive people wouldn't need to pay for Tinder to get boosted ;)
Score: 9 Votes (Like | Disagree)

These results show how much value Apple brings to the table in return for the cut it takes. Apple's customer base brings in nearly 5x the revenue as Google's, which means for what is probably the same amount of development effort the upside for iOS is significantly higher.

That's why I think the whole "Apple's fee is too high" argument isn't valid since Apple offers access to a much more lucrative customer base than Google, even if Android has a larger market share. Companies may whine about Apple's cut because they want that for themselves (especially since Apple's cut is about the total for Google Play) but will not walk away because that's where they make the most money.


To put the fairness argument in another light, companies should cut the subscription fees significantly for iOS because they make a lot more from them for the same costs of development, and thus their margins are "unfair." I doubt any would agree with that yet that is essentially a main part of the argument they make against Apple's fees. It's not about fairness but about money.

The non existence of piracy on iOS is a consequence of only having one way to download apps.

Which, of course is a good thing for developrs as well as customers.
Score: 7 Votes (Like | Disagree)

Mind you, piracy is rampant on Android...

The non existence of piracy on iOS is a consequence of only having one way to download apps.
Score: 4 Votes (Like | Disagree)

Tuesday May 4, 2021 9:51 am PDT by Juli Clover
Just after Apple announced its AirTags, Tile CEO CJ Prober relayed his concerns about competing with Apple in the tracking space, and said that Tile would ask Congress to investigate Apple's business practices specific to Find My and item trackers. Prober this week did an interview with Bloomberg, where he further expanded on Tile's complaints about Apple and why he feels that Tile is...
Read Full Article • 402 comments