During its earnings report covering the fourth quarter of 2020, Disney today announced that it has surpassed 94.9 million subscribers (via CNBC). 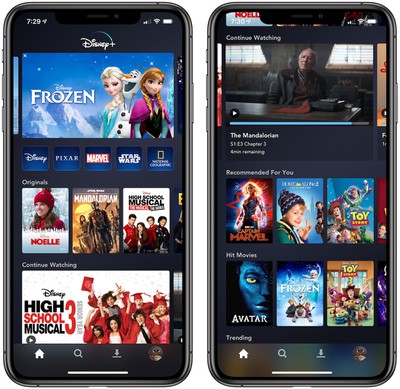 With that kind of subscriber growth, Disney+ will likely surpass Netflix. Netflix in January said that it had more than 200 million subscribers worldwide.

Apple does not provide ‌Apple TV+‌ subscriber numbers so there's no direct comparison to make, but if Apple had Disney+ numbers, Apple executives likely would have mentioned it. ‌Apple TV+‌ has not been able to compete with Disney+ because of Disney's established catalog of content along with popular Star Wars and Marvel original shows.

Apple has been ramping up its selection of movies and TV shows, but it will be years before the company has a catalog that can compete with most other streaming services.

I have it free because of Verizon. :p

Verizon is merely passing Disney+ subscription as part of your Verizon plan. Probably not full $6.99/month, but a good percentage of it. It's certainly not free.
Score: 11 Votes (Like | Disagree)

I think Apple is more than capable of buying Disney.

Disney's market cap is ~$346 billion. That's much bigger than the largest acquisition that's ever happened and Apple would have to pay a hefty premium over that. It would likely be close to $500 billion, not a drop in the bucket for Apple.
Score: 11 Votes (Like | Disagree)

FasterQuieter
Once I had finished The Mandalorian, which was nowhere near as good as I had heard, I couldn't find anything else to watch. So I cancelled.
Score: 8 Votes (Like | Disagree)

AppleTV+ is confusing. I got the free trial when I bought an iPhone 12 and finding shows to watch has been challenging. I'll find something that looks interesting and it says I need to rent or buy it. I don't see why there isn't an option to just see what you can actually watch with the subscription without renting or buying.

yes its really stupid cuz apple just throws everything into one pot. The easiest way is to look for the „TV+ Channel“
Score: 7 Votes (Like | Disagree)

LeeW
How many are actually paying though?
Score: 7 Votes (Like | Disagree)

How many are actually paying though?

I have it free because of Verizon. :p
Score: 6 Votes (Like | Disagree)
Read All Comments

Tuesday May 4, 2021 9:51 am PDT by Juli Clover
Just after Apple announced its AirTags, Tile CEO CJ Prober relayed his concerns about competing with Apple in the tracking space, and said that Tile would ask Congress to investigate Apple's business practices specific to Find My and item trackers. Prober this week did an interview with Bloomberg, where he further expanded on Tile's complaints about Apple and why he feels that Tile is...
Read Full Article • 443 comments

Wednesday May 5, 2021 11:03 am PDT by Juli Clover
As the Epic Games v. Apple trial progresses into its third day, Apple's internal documents and communications with various companies are continuing to surface, giving us some insight into the dealings that Apple has had around the App Store. Back in December 2018, Netflix stopped offering in-app subscription options for new or resubscribing members and instead began requiring them to sign up ...
Read Full Article • 398 comments