YouTube's website appears to support picture-in-picture (PiP) again in the latest iOS 14.5 beta for iPhone, although how long it will continue to work for is anybody's guess. 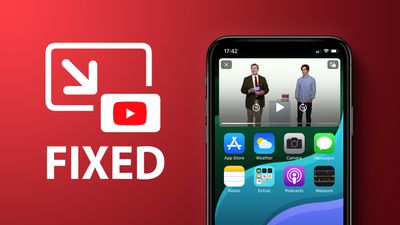 Tests show it works in Safari as well as third-party browsers like Chrome and Firefox by expanding a video to play fullscreen, and then tapping the small picture-in-picture icon in the top-left of the interface.

Then you can minimize the browser and use other apps while continuing to watch the video in a frame that can be moved around the screen or slid out of sight if you just want to listen to the audio.

Apple added PiP support to the iPhone with the release of iOS 14, which allowed users to watch videos on YouTube's website as well as on a host of other websites in the miniaturized format.

Then, only days later, support once again vanished.

In the latest iOS 14.5 beta, Picture in Picture mode is working again on YouTube’s website, in not just Safari, but in every browser I have on my iPhone. ¯\_(ツ)_/¯ pic.twitter.com/pP8cRsO3xU — Tim Hardwick (@waxeditorial) February 10, 2021

It's not clear what has caused YouTube website PiP support to be reinstated in the latest iOS 14.5 beta, but it's likely that changes in Apple's system-level code has broken whatever method YouTube implemented on its website to make the feature non-functional.

If that's the case, there's good reason to believe that YouTube will move to disable the support yet again.

YouTube's native app has never supported PiP for any of its users even though iOS 14 has offered the capability for some time. There have been reports that YouTube has been testing this feature, but there have been no announcements.

LCPepper
It still amazes me how Google dedicates so much time to restricting how we use our own devices
Score: 26 Votes (Like | Disagree)

flottenheimer
Such a ridiculous constraint.

You can watch Youtube in a window while doing other stuff on any MacOS or Windows computer – why that should not be possible on iOS makes no sense to me. I assume Youtubes ad-revenue doesn't suffer no matter the size I'm viewing Youtube in. And Youtube Premium should really be attractive for other more substantial reasons than PiP on iOS.
Score: 17 Votes (Like | Disagree)

To be honest, I bit the bullet because I got so tired of wasting 20% of my time watching or listening to ads.

A free ad blocker will solve that.
Score: 11 Votes (Like | Disagree)

Are you lost? Do you know where you are? Absolutely comical statement coming from an Apple fan.
Score: 5 Votes (Like | Disagree)

I use the free version of AdBlock Pro. It's available for macOS and iOS/macOS and works great.
But keep in mind that you have to use Safari (or probably any other browser) to watch YouTube videos on iOS, it won't work if you use the YouTube app.
Score: 5 Votes (Like | Disagree)
Read All Comments

Sunday February 5, 2023 6:07 am PST by Joe Rossignol
Apple has discussed selling a new top-of-the-line iPhone alongside the Pro and Pro Max models in 2024 at the earliest, according to Bloomberg's Mark Gurman. Based on this timeframe, the device would be part of the iPhone 16 lineup or later. In a September 2022 edition of his weekly "Power On" newsletter, Gurman said there was "potential" for an iPhone 15 Ultra to replace the iPhone 15 Pro...
Read Full Article • 384 comments