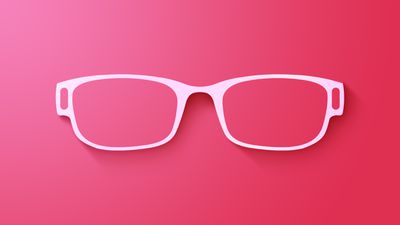 Development on micro OLED displays is said to be in the trial production stage and it will be several years before Apple and TSMC are ready for mass production, which would make these displays appropriate for the Apple Glasses rumored to be launching sometime around 2023. The displays that are in the works right now are said to be less than one inch in size, which is where TSMC's expertise comes in handy.

Apple already partners with TSMC on all of the A-series chips used in the iPhone and iPad and the new M1 Apple silicon chips that are used in Apple's Mac lineup.

"Panel players are good at making screens bigger and bigger, but when it comes to thin and light devices like AR glasses, you need a very small screen," said a source who has direct information on the micro OLED R&D project. "Apple is partnering with TSMC to develop the technology because the chipmaker's expertise is making things ultra-small and good, while Apple is also leveraging panel experts' know-how on display technologies."

In addition to working on micro OLED displays in factories located in Taiwan, Apple is also exploring microLED technology, with trial production lines in place for both display types. A June 2020 report suggested Apple had invested $330 million in a Taiwanese factory developing microLED displays for Apple Watch, iPads, and MacBooks alongside supplier Epistar.

MicroLED, a technology separate from micro OLED, uses components that are smaller than those used in traditional LED lighting. These displays do not require backlight modules so they can be thinner, plus they offer high color contrast and can be used to make foldable or curved screens.

According to Nikkei, Apple has several unmarked white laboratory buildings in Longtan Science Park in Taiwan focusing on new display technologies, with the location within walking distance of TSMC's chip-packing and testing plant. Apple has been hiring veterans from display maker AU Optoelectronics to work on micro OLED, and employees are subject to strict non-disclosure agreements that forbid them from "even meeting with friends or acquaintances working in the tech industry."

Apple's investments in both micro OLED and microLED are said to be aimed at reducing its dependence on Samsung Electronics in the future. Samsung is Apple's main supplier for the OLED displays used in current iPhones.

Never liked wearing watches either, until the Apple watch.
Score: 13 Votes (Like | Disagree)

entropys
I am waiting for transparent aluminium.
Score: 8 Votes (Like | Disagree)

TheYayAreaLiving ?
Apple Glasses are expected to land before Apple car.

Now the million dollar question, will everyone copy apple once they release them, or will Samsung mock apple and then rush a half baked product to the market like the rest of their hardware. ?

They’ll come out 3 months before the Apple Glasses but have no clear use case so the 3 early adopters will enjoy looking at their Samsung Pay transactions in AR and converting people’s faces into emoji.
Score: 5 Votes (Like | Disagree)

Never liked wearing watches either, until the Apple watch.

Now the million dollar question, will everyone copy apple once they release them, or will Samsung mock apple and then rush a half baked product to the market like the rest of their hardware. ?
Score: 4 Votes (Like | Disagree)

I am waiting for transparent aluminium.

Aluminum oxide (Al₂O₃)… is the base for rubies and sapphires… sooo… sapphire glass basically is the transparent aluminum that you've been waiting for.
Score: 3 Votes (Like | Disagree)
Read All Comments