Apple today seeded a second RC version of an upcoming macOS Big Sur 11.2 update to developers for testing purposes, with the new update coming a week after the first RC and two months after initial macOS Big Sur release. 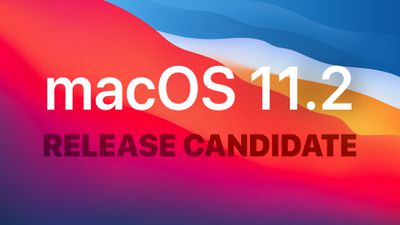 macOS Big Sur 11.2 eliminates a feature that allowed Apple apps bypass third-party firewalls, security tools, and VPN apps. macOS Big Sur 11 included a ContentFilterExclusionList that let Apple's apps like the App Store, Maps, iCloud, and more to avoid firewall and VPN apps that users had installed. These apps were not able to filter or inspect traffic for some built-in Apple apps. That functionality has been removed in macOS Big Sur 11.2.

macOS Big Sur 11.2 improves Bluetooth reliability and fixes the following issues:
- External displays may show a black screen when connected to a Mac mini (M1, 2020) using an HDMI to DVI converter
- Edits to Apple ProRAW photos in the Photos app may not save
- iCloud Drive could turn off after disabling the iCloud Drive Desktop & Documents Folders option
- System Preferences may not unlock when entering your administrator password
- Globe key may not display the Emoji & Symbols pane when pressed

The update addresses a bug that could cause external displays to show a black screen when connected to an M1 Mac mini using an HDMI to DVI converter, and it fixes an issue that resulted in edits to Apple ProRaw photos in the Photos app not to save. It also includes fixes for iCloud Drive, System Preferences, and more.

Their primary focus is selling hardware, software is what they sell along with. They have been great at both through time, but so long as people buy the hardware, they are fine taking months to fix issues with their flagship machines, often into the next year by the time the next major release is scheduled. And a sample of people here on this forum find that acceptable. I would say most in the world are okay with it, going by the sales numbers and Apple's refusal to get around this habit.

I'd say that's an accurate summary on where software QA is today at Apple.
Additionally, some clearly recognizable / daily visible bugs seem to persist over years and several generations of macOS, like for example the almost-always-wrong account balance in the lower left corner of App Store App (being persistent without any improvement since at least the first days of Mojave), or the permanent problems with Apple Watch unlock (appearing in most macOS dot revisions since introduction of this feature) or with Handoff - just to name a few.

Looks like they can afford to do so, as most customers don't care / don't even understand what's happening when they are hindered by OS bugs. And the alternatives are even weaker - Windows in terms of stability, Linux in terms of effort and knowledge required for configuration and maintenance. Although I seriously doubt Windows can still be regarded as less stable if just compared to Catalina - there were so many Macs with a multitude of serious problems even up to the latest release of Catalina (including my 2014 iMac) that Windows suddenly looked like the more reliable alternative.

But that doesn't necessarily mean that it will continue that way. Typing this text on a M1 Mac, I cannot ignore that they did an extremely good job setting up the new architecture with all components required for the transition. Rosetta 2 really performs well and this machine is just a pleasure to work with. Of course there are still quite some bugs (especially with peripherals like Bluetooth devices and external Monitors, but also quite a number of other issues), but things are definitely not even nearly as bad as they were in Catalina one year before. This leads me to the assumption that maybe the "Catastrophina" was also caused by focusing most of the energy towards the next-year OS generation in order to ensure a smooth architecture transition.

So, l'm looking forward, optimistic that the remaining issues in Big Sur will be fixed in a reasonable time period (despite having experienced the opposite last year).
Score: 7 Votes (Like | Disagree)

nortonandreev
RC1 is 20D53, RC2 is 20D62. Quite a big of a jump for one working day between releases. Interesting.
Score: 7 Votes (Like | Disagree)

Donza
Also out for the Public Beta testers. Here's hoping there is further improvements to Bluetooth.
Score: 7 Votes (Like | Disagree)
Read All Comments