Apple today seeded the RC version of upcoming iOS 14.4 and iPadOS 14.4 updates to developers for testing purposes, with the new betas coming a week after Apple released the second betas. 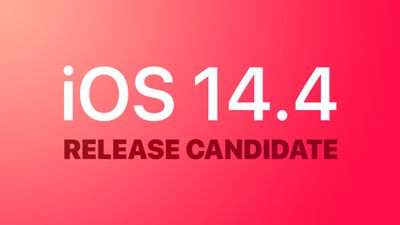 iOS 14.4 and iPadOS 14.4 can be downloaded through the Apple Developer Center or over the air after the proper profile has been installed on an iPhone or iPad.

Paired with the HomePod 14.4 beta that is only available to a limited number of testers, iOS 14.4 adds new HomePod mini functionality that takes advantage of the mini's U1 chip.

There are now visual, audio, and haptic effects when songs are transferred from a HomePod mini to a U1-enabled ‌iPhone‌ 11 or iPhone 12. When an ‌iPhone‌ is near the ‌HomePod mini‌ it begins a soft haptic touch rhythm that gets faster and faster as the ‌‌iPhone‌‌ gets closer until the interface to transfer a song between the ‌‌HomePod mini‌‌ and the ‌‌iPhone‌‌ opens.

This functionality will make handoff quicker and more reliable on a ‌‌HomePod mini‌‌ and an ‌iPhone‌ 11 or ‌iPhone 12‌, all of which are equipped with U1 chips that let the devices better understand where they are in relation to one another.

In the Workout section of the Apple Watch app on ‌iPhone‌ there's a new "Time to Walk" feature that includes a toggle to "Add Newest Workouts to Watch." This suggests that Apple could be planning to add guided walking workouts in the watchOS 7.3 beta. "Time to Walk Workouts are downloaded when Apple Watch is connected to power and near your ‌iPhone‌. Completed workouts are deleted automatically," reads the setting. This is not functional in the first beta of watchOS 7.3 and iOS 14.4, but could be activated later.

iOS 14.4 includes a setting to specify a device type for third-party Bluetooth-connected audio devices so that Headphone Audio Level measurements can be taken correctly. Apple tracks headphone audio levels to send alerts if music is playing at a level that has the potential to damage hearing health over time.

iOS 14.4 includes code that suggests Apple will add a warning on iPhones that have had their cameras repaired or replaced with aftermarket components. The warning, which says "Unable to verify this ‌iPhone‌ has a genuine Apple camera," will let users know that the camera is not a legitimate Apple camera. Apple's full release notes for the update are below:

iOS 14.4 includes the following improvements for your iPhone:
- Smaller QR codes can be recognized by Camera
- Option to classify Bluetooth device type in Settings for correct identification of headphones for audio notifications
- Notifications for when the camera on your iPhone is unable to be verified as a new, genuine Apple camera in iPhone 12, iPhone 12 mini, iPhone 12 Pro and iPhone 12 Pro Max

This release also fixes the following issues:
- Image artifacts could appear in HDR photos taken with iPhone 12 Pro
- Fitness widget may not display updated Activity data
- Typing may be delayed and word suggestions may not appear in the keyboard
- The keyboard may not come up in the correct language in Messages
- Audio stories from the News app in CarPlay may not resume after being paused for spoken directions or Siri
- Enabling Switch Control in Accessibility may prevent phone calls from being answered from the Lock Screen

There's no word yet on when iOS 14.4 will be released, but as release notes are available, the public version could be coming soon.

itsmeaustend
No fix for missing message notifications? They finally acknowledged it in the Feedback app and marked it as “for a future update”... guess this isn’t it...
Score: 9 Votes (Like | Disagree)

MagicMiguel
What about the stutter when you swipe up to go home and it ends up in the multitasking view?
Score: 8 Votes (Like | Disagree)

MacBird
Is the stutter/delay when closing apps gone?
Score: 5 Votes (Like | Disagree)

In all seriousness, Apple's Official Position on the Matter is that there is no issue and you need to contact your carrier. It's crystal clear this is an iPhone issue but Apple's current approach is to send everyone to the carrier.
Score: 3 Votes (Like | Disagree)
Read All Comments