Apple today seeded the second betas of upcoming iOS 14.4 and iPadOS 14.4 updates to developers for testing purposes, with the new betas coming a month after Apple released the first betas. 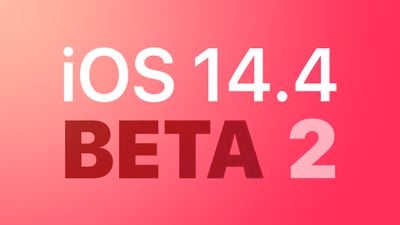 iOS 14.4 and iPadOS 14.4 can be downloaded through the Apple Developer Center or over the air after the proper profile has been installed on an iPhone or iPad.

Paired with the HomePod 14.4 beta that is only available to a limited number of testers, iOS 14.4 adds new HomePod mini functionality that takes advantage of the mini's U1 chip.

There are now visual, audio, and haptic effects when songs are transferred from a HomePod mini to a U1-enabled ‌iPhone‌ 11 or iPhone 12. When an ‌iPhone‌ is near the ‌HomePod mini‌ it begins a soft haptic touch rhythm that gets faster and faster as the ‌‌iPhone‌‌ gets closer until the interface to transfer a song between the ‌‌HomePod mini‌‌ and the ‌‌iPhone‌‌ opens.

This functionality will make handoff quicker and more reliable on a ‌‌HomePod mini‌‌ and an ‌iPhone‌ 11 or ‌iPhone 12‌, all of which are equipped with U1 chips that let the devices better understand where they are in relation to one another.

In the Workout section of the Apple Watch app on ‌iPhone‌ there's a new "Time to Walk" feature that includes a toggle to "Add Newest Workouts to Watch." This suggests that Apple could be planning to add guided walking workouts in the watchOS 7.3 beta. "Time to Walk Workouts are downloaded when Apple Watch is connected to power and near your ‌iPhone‌. Completed workouts are deleted automatically," reads the setting. This is not functional in the first beta of watchOS 7.3 and iOS 14.4, but could be activated later.

No other new features or changes were discovered in the first beta. The update likely focuses on performance improvements and bug fixes that weren't able to be addressed in the iOS 14.3 update, but it's also possible there are additional features that will be unlocked at a later date.

Update: iOS 14.4 includes a new setting to specify a device type for third-party Bluetooth-connected audio devices so that Headphone Audio Level measurements can be taken correctly. Apple tracks headphone audio levels to send alerts if music is playing at a level that has the potential to damage hearing health over time.

Was Apple late with this one? Have they fallen short of your beta release schedule expectations?

TheYayAreaLiving ?
Finally new Beta! Apple is back at it.

LFC2020
Does it fix the green tint issue on the iPhone 12 series?

I want my grey colours to look grey not yellow/green. ?
Score: 5 Votes (Like | Disagree)

roncron
It's been a long month.
Score: 5 Votes (Like | Disagree)

tubular
I hope this addresses the really spectacular battery drain issues on the iPhone SE (original).
Score: 4 Votes (Like | Disagree)