Google Maps has quietly been updated to include significantly more detailed street-level information in a handful of key cities around the world. 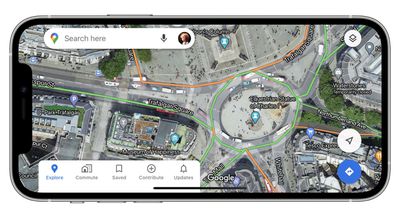 Upon zooming in, Google's maps for Central London, Tokyo, San Francisco, and New York now benefit from shapes and widths that match the scale of roads more accurately.

Meanwhile, enhanced graphical representations of sidewalks, crosswalks, pedestrian islands, and street-side flora have also been added, which should help users who rely on the maps for walking directions.

Lastly, parks now show the actual width of pathways in dark green along with any stairs in grey, offering improved accessibility information for wheelchair users or people with a stroller.

Some of the improvements are undoubtedly subtle, but underline Google's commitment to improving city-wide coverage. The changes are server-side and therefore require no software update, and Google says it plans to expand the new details to additional cities in the future.

Spacetime Anomaly
Ah. Lovely. The outside world. I remember it well.
Score: 14 Votes (Like | Disagree)

poopiebabies unite!
Great, but Apple's "Look Around" in NYC is awesome!
Score: 6 Votes (Like | Disagree)

keifer.street
Meanwhile @ Apple:
“Apple releases new 3D flyovers in four major cities. This is what everyone cares about - the flyovers. Right? RIGHT?!”
Score: 4 Votes (Like | Disagree)

I find it frustrating that you cant use Apple Maps everywhere. I was working in Kuwait and could not use it for turn-by-turn directions because it wasn’t available in the area. Google Maps and Waze worked fine.

Same here. I travel extensively and I can confirm Apple Maps is pretty much useless outside the USA not just for the lack of navigation but because of the inaccuracy and pre-cold war area names still attached to cities and streets.

It has gotten so much better in the States that for the third time I am using it as my main navigation app, in the past I tried and it was just not on par with the competition, I can see the improvements now.

It still has a long way to go, they could work on:

1. Better handling of pins and coordinates, this is important for professionals like geologists, engineers, biologists, etc.

2. More detailed turn-by-turn navigation, it is still behind the precision and detail offered by Google Maps. Apple Maps sometimes tells me "the next exit" I have to take but it would not tell me the exit number, which is something I would like to know in advance.

3. Public transportation implementation. Even though I can find routes in my city, some of them are even routes that have been eliminated. In contrast Google Maps tells me exactly where the bus is in REAL TIME, I can literally track it and not just rely on an ETA.

4. And most importantly: OFFLINE functionality. Several mapping apps in the store offer me to download maps for offline usage, but Apple Maps will not let me do that, it is frustrating as I work on the field constantly and cellphone reception is not available most of the time.
Score: 3 Votes (Like | Disagree)

Because Apple doesn't track or collect as much data as Google does. As much as MacRumors hates on Android and anti-privacy practices of others you can always be sure that you will find your way/what you are looking for using Google Maps.

What on earth are you on about?
they are free to take photos of my street and obscure faces and license plates just like google does.

That old trope that gets pedalled around here is so tired.
Score: 2 Votes (Like | Disagree)