Apple Researching iPhone Cases That Can Charge AirPods and Other Accessories

Apple is researching a number of unique iPhone cases that can charge AirPods, as well as other accessories, according to newly-granted patent filings. 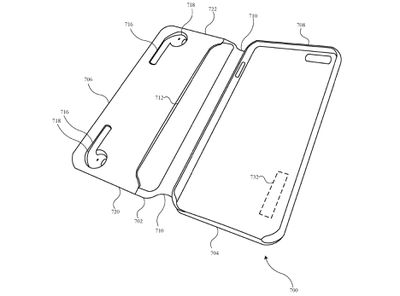 The patent, spotted by AppleInsider, titled "Cases and folios for carrying and charging accessories" and was granted by the United States Patent and Trademark Office. While the patent predominantly "relates to a case for retaining a portable electronic device and an accessory," suggesting that it could apply for virtually any external accessory, the majority of the images included in the filing clearly feature AirPods.

The filing outlines a wide range of different configurations for storing and charging AirPods or other electronic accessories within an ‌iPhone‌ case, including "a folio, a wallet, a flap, a cover, an enclosure, a holster, a clip, a sleeve, an armband, or suitable combination hereof." Specifically, it covers cases with "a cavity that generally corresponds to the dimension of an accessory" and a number of terminals, as well as a battery.

If the case variant contains a battery, it can be charged via a terminal from the device in the case. This battery can then charge accessories via another terminal. Apple also highlighted that cases could communicate with the device inside and accessories via NFC and have "a slotted compartment to store money and credit cards."

One of the main designs for the case depicts AirPods being charged within a long, raised section on the front of a folio.

Another less well-developed case design features "two openings, one at each end for receiving accessory devices," on the top of a case. Each opening contains "a charging terminal in between for energy transfer between the receptacle and the accessory devices." AirPods or other accessories "can be retained through frictional fit, magnetic coupling, or both."

Unlike the folio design, this variant is less invasive and more lightweight. However, it leaves much of the AirPods exposed and offers less protection. It is also unclear if this slimmer design is able to include a battery for charging, or if it solely relies on the ‌iPhone‌ itself for power.

Other case variants visualize AirPods being charged on the back of a case in a design that appears to be similar to the MagSafe Wallet.

It may be important to contextualize this patent with the understanding that Apple is increasingly interested in its accessories segment, which has been bolstered in recent years with Apple Watch bands and ‌MagSafe‌ accessories. While patent filings do not necessarily prove what Apple is intending to implement on a consumer product and the contents of many patents never come to market, an ‌iPhone‌ case that can stow AirPods does not seem to be an unfeasible product.

In light of its expanding selection of accessories and increasingly modular approach, an ‌iPhone‌ case for AirPods could offer a compelling option for users that frequently travel with both devices, should Apple ever choose to release the product. 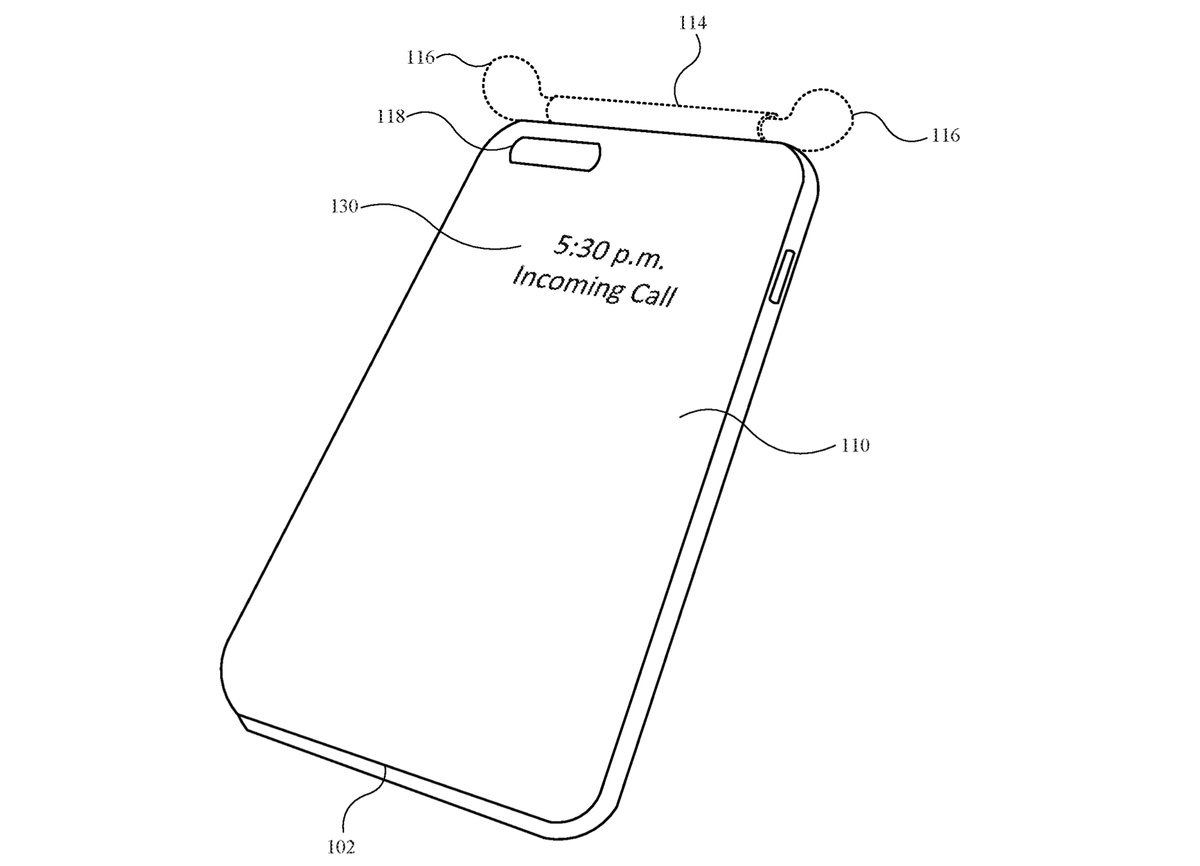 Justin Cymbal
This would be an awesome feature!

nattK
Oh yes and they'll probably price it absurdly expensive too. Only $249!
Score: 2 Votes (Like | Disagree)

Lucca2
nah! I rather have a reverse wireless charging integrated on the back of the iPhone as most of the expensive android have it
Score: 2 Votes (Like | Disagree)

It would definitely make the daily commute interesting. For everyone.
Score: 1 Votes (Like | Disagree)
Read All Comments

Wednesday March 23, 2022 7:46 am PDT by Mitchel Broussard
Nomad this week is offering up to 30 percent off select items during its "Spring Cleaning Sale." This event includes savings on iPhone cases, wireless chargers, Apple Watch bands, AirPods cases, cables, and much more. Note: MacRumors is an affiliate partner with Nomad. When you click a link and make a purchase, we may receive a small payment, which helps us keep the site running. You can bro...
Read Full Article • 4 comments

Wednesday December 7, 2022 12:24 pm PST by Juli Clover
With the iOS 16.2 release candidate that came out today, Apple added the new Apple Music Sing feature that was announced earlier this week. We thought we'd check out the new karaoke feature to see how it works. Subscribe to the MacRumors YouTube channel for more videos. Apple Music Sing is available on modern iPhones and iPads, as well as the newest Apple TV 4K. It's built in to the Apple...
Read Full Article • 119 comments

Tuesday December 6, 2022 2:31 pm PST by Juli Clover
Apple is aiming to launch an Apple-branded consumer-oriented vehicle by 2026, and its goal is to hit a price point under $100,000 to make the car appeal to a wider range of customers, reports Bloomberg. Apple initially planned to design a car that might look similar to Canoo's Lifestyle Vehicle, where passengers could face one another in a limousine-style car with no steering wheel or...
Read Full Article • 322 comments

Thursday December 8, 2022 7:05 am PST by Joe Rossignol
iOS 16.2 is expected to be released next week following nearly two months of beta testing. With last-minute additions like Apple Music Sing and Advanced Data Protection, the software update now has over a dozen new features for the iPhone. Below, we've recapped many of the new features coming with iOS 16.2, including Apple's new whiteboard app Freeform, two new Lock Screen widgets, the...
Read Full Article • 73 comments