Dell this week unveiled a series of new monitors, and there is one in particular that stands out for Mac users: the UltraSharp 40 Curved WUHD Monitor. 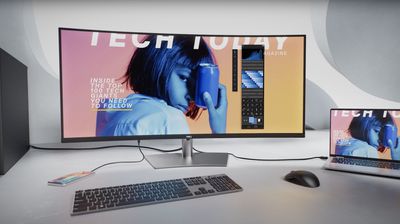 A built-in Thunderbolt 3 port allows the UltraSharp 40 to be connected to a compatible Mac with a single cable, and the monitor can power a MacBook Pro with up to 90W of pass-through charging. Other connectivity includes two HDMI 2.0 ports, a DisplayPort 1.4 port, three 10Gbps USB-A ports, one USB Type-B upstream port, an Ethernet port, and a 3.5mm headphone/audio jack on the back of the monitor, plus one 15W USB-C port and another 10Gbps USB-A port on the bottom of the monitor for quick access.

Dell says the UltraSharp 40 is a 10-bit display that covers 100% of the sRGB and 98% of the DCI-P3 color spaces, producing 1.07 billion colors. However, for a high-end monitor, peak brightness is relatively low at 300 nits. Other specs include a fast 5ms response time, a 60Hz refresh rate, 2500R curvature, built-in KVM functionality, and integrated 9W speakers. Dell did not indicate whether there is HDR support, so it should not be expected.


The UltraSharp 40 is intended for content creators, creative professionals, data analysts, and coders. A picture-in-picture mode allows the UltraSharp 40 to mimic two displays side by side, and a so-called "ComfortView Plus" feature reduces blue light.

Dell says the UltraSharp 40 will be available beginning January 28, with pricing starting at $2,099.99 in the United States.

Having owned 38” and 49” displays, I’d argue curvature is a necessity at this size for long term ease of use.

That said, I’m thinking hard about this monitor; the two additional years of warranty vs any LG future equivalent is enticing too.
Score: 25 Votes (Like | Disagree)

TheDailyApple
The low brightness and lack of HDR is a deal breaker for me. With most phones and TVs supporting HDR these days, color editing with that in mind is a must.
Score: 22 Votes (Like | Disagree)

I really really hated curved TVs.... but I own a 49” ultra wide that has a curve.... and I actually wish the curve was BIGGER. It works really good when there’s a single expected viewpoint (unlike a tv)
Score: 18 Votes (Like | Disagree)

DesertNomad
I still think my XDR was worth it - even at the crazy price Apple gets for them.
Score: 16 Votes (Like | Disagree)
Read All Comments