In celebration of Chinese New Year, Apple today launched a special edition version of the AirPods Pro that feature an Ox icon, as 2021 is the Year of the Ox. 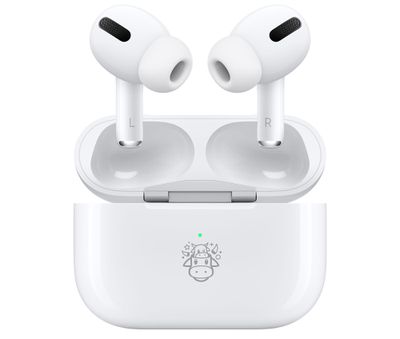 The AirPods Pro, which are priced at RMB 1,999, are identical to standard ‌AirPods Pro‌ but feature an ox engraved on the charging case. They also ship in a box that has the same ox icon on it.

Apple unveiled the new ‌AirPods Pro‌ on WeChat. "Here comes a box of blessings for the Year of the Ox," reads the translated announcement, which is also accompanied by several ox-themed graphics and an Apple Music playlist with songs for the new year. In 2021, Chinese New Year will begin on Friday, February 12, 2021.

Apple says that the ox-themed ‌AirPods Pro‌ are in short supply, with a total of 25,400 available. 11,480 of those will be sold in retail stores, while 13,920 are available for purchase online.

I, for one, can't support any particular support of Chinese culture over any other culture. Why is this special?

Speaking from the stance of market(s) -

"According to November data from Counterpoint Research, Apple had just 8 percent of the market share in China during the third quarter of 2019, down from 9 percent during the same time period in 2018. Huawei is the market leader with a 40 percent share, trailed by Vivo, Oppo and Xiomi"

As an AAPL holder since 1999, I don't really care about this. I do care about market diversification - manufacturing efficiencies, and an edge over competitors in emergent markets and unrealized spaces. This, to me, looks like some kind of appeasement. Does the combined tax+labour offset in China really impact your COG to such an extent that China, your *minority* market gets special and highly unique branding?
...

This is borderline jingoistic hypocrisy.

First of all, China is Apple's largest market by revenue and has been for over ten years. It's not important for Apple to be the dominant brand in any specific market, they just want to be the dominant brand at the high end, where the lion's share of the profits are. This includes the United States of America and every other industrialized nation (UK, France, Germany, Japan, etc.).

You claim to be an AAPL shareholder since 1999 [sic] and yet you don't seem to realize that most of Apple's phone handset competitors ship the majority of their volume in dumbphones (a.k.a. "feature phones") and low-end smartphones, often at a loss.

Second, by your criteria Apple should ditch all regionally specific promotional activity. That would meaning dumping Black Friday sales in Western countries.

Remember that southeast Asian countries don't recognize Christmas as an official holiday. This includes Japan (which gets the Lucky Bag promotion) and China (which get this type of lunar new year promotion).

Why should Western nations get Christian-themed promotions and shut out the rest of non-Christian world (which happens to have a majority in population)?

And what about back-to-school promotions? Not every country starts the school year in the fall (August-September-October).

Please feel free to expound on your reasoning why regional Apple sales divisions can't use some of their discretionary promotional budget in an appropriate and timely manner to increase sales.
Score: 31 Votes (Like | Disagree)

I, for one, can't support any particular support of Chinese culture over any other culture. Why is this special?

There are roughly 50 million ethnic Chinese people living outside China/HK/Taiwan, and many of them are not even citizens of PRC nor born in China. So let's be clear first that Chinese culture != CCP/PRC.

Besides, how is this different than Apple releasing pride watch band or celebrating black history month?
Score: 17 Votes (Like | Disagree)

This is nice and all but... why is there an ox coming out of the ox?

Because we’ve moved on from bats. Duh.

Good marketing tactic, Chinese New Year is a time for giving in their culture.

So is Christmas in many other cultures. Where are the Christmas edition AirPods? Or Hanukkah for that matter?
Score: 10 Votes (Like | Disagree)

Friday November 12, 2021 7:00 am PST by Mitchel Broussard
Pre-holiday discounts on Apple's AirPods lineup have continued to appear in the weeks leading up to Thanksgiving and Black Friday, and today we're highlighting some of the best ongoing deals you can find. Starting with the AirPods Pro with MagSafe Charging Case, you can get this model for $189.99 on Amazon and Target, down from $249.00. Note: MacRumors is an affiliate partner with these...
Read Full Article • 17 comments

Wednesday October 13, 2021 3:24 pm PDT by Juli Clover
Back in October of 2020, Apple introduced a service program to address AirPods Pro issues that could cause them to experience static, crackling sounds, or problems with Active Noise Cancellation. At the time, Apple said the program would cover the AirPods Pro for two years after the retail sale of the unit. Apple has now extended the program, quietly updating the accompanying support document...
Read Full Article • 114 comments

Thursday January 20, 2022 3:02 pm PST by Juli Clover
Apple today shared a short film called "The Comeback," which has been released in celebration of Chinese New Year. Created by director Zhang Meng, the video kicks off the Year of the Tiger with the story of a father, a son, and a forgotten village with an "out-of-this-world dream." The 23 minute film was shot using the latest iPhone (which is the iPhone 13 Pro) like all of the videos in...
Read Full Article • 64 comments

Saturday January 1, 2022 1:56 pm PST by Joe Rossignol
In celebration of the upcoming Chinese New Year on February 1, Apple has released special-edition AirPods Pro with a custom-designed tiger emoji through its online store and retail stores in China, Taiwan, Hong Kong, and Macao. 2022 is the Year of the Tiger on the Chinese calendar. The special-edition AirPods Pro have a custom-designed tiger emoji printed on the wireless charging case, with...
Read Full Article • 65 comments