Samsung has sent out media invites to its Galaxy Unpacked event on Thursday, January 14, when the company is expected to officially announce its new Galaxy S21 lineup.


Samsung is expected to unveil three new smartphones at the event: The Galaxy S21, S21 Plus, and S21 Ultra. The successors to last year's Galaxy S20 series will come in familiar 6.2 to 6.8-inch size options, with the S21 and S21 Plus said to be similar except for size, and the S21 Ultra offering a more premium device featuring better specs and cameras, and support for Samsung's S-Pen stylus.

According to rumors, the S21 and 21 Plus have a flat display with a centered hole-punch camera and minimal front bezels, while the rear camera is a triple camera setup arranged vertically, consisting of a 12MP main sensor, a 12MP ultra wide, and a 64MP telephoto lens.

Meanwhile, the S21 Ultra has a larger curved screen and a quad-lens camera system featuring a single periscope lens with 10MP 10x super-telephoto zoom, alongside a 108MP main sensor, a 12MP ultra wide, and a 10MP 3x telephoto camera. It also has a laser autofocus system that replaces the time-of-flight sensor found in the S20 Ultra. 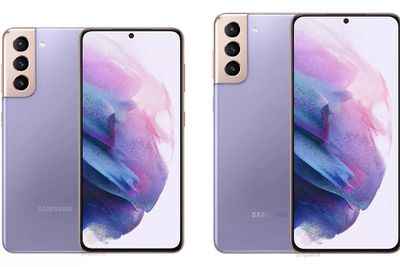 Image credit: WinFuture
Samsung is rumored to use Qualcomm's Snapdragon 888 and Exynos 2100 chips in its new smartphones depending on the region. Like their predecessors, all the devices will offer 120Hz and 60Hz refresh rates as well as 5G connectivity.

We'll have coverage of the event as it is interesting to take a look at what new features Apple's competitors are unveiling to compete with the ‌iPhone‌.

rp2011
Apple needs Samsung to be healthy. Apple’s consumers and stockholders need Samsung and competition to be healthy. Samsung makes good products. Without healthy competition we get innovative stagnation and even worse, complacency. We also get government intervention.
So here is to Samsung and Android and Google and Microsoft and Intel and AMD and Qualcomm and everyone having a great year this year!
Score: 19 Votes (Like | Disagree)

Will there be any charger included in the box?

Is it me or does this event keep happening earlier every year?

Relentless Power
The Galaxy line has some decent hardware specs’, that’s for sure. And they’ve got some nice advantages over the iPhone, but I just can’t convert over to android. Unless they can match Apples security and fluidity with continued software updates, there is a reason the iPhone has such a strong-hold when it’s more about the software integration to the user experience, then it is about the hardware.
Score: 13 Votes (Like | Disagree)

goobot
Is it me or does this event keep happening earlier every year?
Score: 10 Votes (Like | Disagree)


It’s not the consistency in which the updates ‘roll out’, it’s the longevity. Three years v.s. five years on the iPhone? I’d say the iPhone is more dominant in that respect. That’s why the iPhones perform so well, and look at the iPhone 7 for example compared to a Samsung Galaxy on the same year, which phone do you think peforms better?
Score: 8 Votes (Like | Disagree)
Read All Comments

Wednesday April 14, 2021 2:28 am PDT by Tim Hardwick
Samsung has teased a new Galaxy Unpacked virtual event on April 28 that will see the company reveal "the most powerful Galaxy" device, which very likely means new laptops rather than new Samsung smartphones. The next Galaxy phones aren't expected to surface for a while yet. According to a report by The Elec, the company is set to launch a Galaxy Z Fold 3 and Galaxy Z Flip 2 at a July event....
Read Full Article • 41 comments

Tuesday August 31, 2021 2:53 am PDT by Sami Fathi
Three years after Apple released walkie-talkie functionality for the Apple Watch, Samsung has released a similar app for the Galaxy Watch 4 and Galaxy Watch 4 Classic. Samsung released the app via the Google Play Store, which was first spotted by XDA Developers. Similar to Apple's own Apple Watch app, Samsung says its walkie-talkie app allows users to "have instant conversations, just like...
Read Full Article • 45 comments