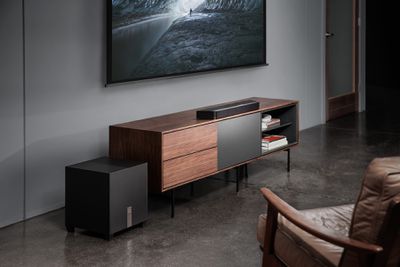 The Studio 3D Mini consists of a 4.1 channel, six-driver array with aluminum tweeters and a compact 8-inch wireless subwoofer. The system can process Dolby Atmos and DTS:X encoded movies via a single HDMI eARC connection, and it offers a number of connectivity options including 4K HDMI in, 4K HDMI with eARC out, optical in, AUX in, and a USB port for music playback.

With ‌AirPlay‌ 2, the Studio 3D Mini will appear in the Home app and Control Center on Apple devices to let you easily beam content from your device and sync among multiple ‌AirPlay‌ 2-compatible speakers, and it can all be controlled via Siri. The system also supports Alexa and Google Assistant for integrating with those ecosystems.

Beyond the usual third-party speaker ecosystems, the Studio 3D Mini is Definitive Technology's first product to include support for HEOS Built-in, which similarly allows users to easily link compatible speaker products together in multi-room audio systems and manage them while also streaming from services such as Spotify and Deezer or directly from the user's music library.

The Definitive Technology Studio 3D Mini sound bar system will be available next month and will be priced at $899.

Definitive Technology is a high end home audio company that puts Bose (and Apple acquired Beats) to shame. Next time in Best Buy, swing by their Magnolia audio store where they stock the line, rather than their regular store, and will typically have DT towers active on their listening display. Historically, one of it's original founders was earlier the founder of Polk Audio, with DT a separate high end company, however now both have been acquired but remain separate entities within their parent company.

It is great to see Apple expanding the functionality of AirPlay 2 into high end systems. Unfortunately, it is a little late for me. DT was on the short list when, along with, Denon, Bower and Wilkins among others, as looking at soundbars and musical, multi room system integration. DT's wireless system fell short and ultimately compromised on Sonus/Alexia based. DT has always had the acoustics, but with the added AirPlay 2 capability, it is a win-win for both DT and Apple.
Score: 7 Votes (Like | Disagree)

Yeah, I see "Atmos support" mentioned more and more without any explanation. As far as I can tell, any device that is capable of taking an Atmos input and downmixing it to play through however many speakers it has can claim it 'supports' Atmos. Any actual ability to output sound over a sound stage in anyway representing the Dolby Atmos standard, be it with real or virtual speakers, doesn't seem to come into it. Just because a soundbar can take a Atmos feed and output it to achieve a degree of spatial effect does not mean that output is a Dolby Atmos environment.

dborja
Great speakers and great customer service! I've had a Definitive 5:1 setup for sixteen years and they sound great - clear highs and mid-range and crisp bass. About five years ago, one of the speakers had a cone break so I contacted them for a replacement. Eleven years so it's out of warranty, right? Well, they responded quickly and told me to send the speaker back without quoting a price. Less than two weeks after sending the speaker, I received a replacement in pristine condition and an invoice that showed no balance!
Score: 3 Votes (Like | Disagree)
Read All Comments

Monday March 21, 2022 4:12 pm PDT by Joe Rossignol
Apple's new Studio Display enables the "Hey Siri" voice command on several older Macs that previously did not support the feature. For example, while "Hey Siri" normally requires a MacBook Pro released in 2018 or later, the feature can be used on 2016 and 2017 models of the 13-inch and 15-inch MacBook Pro while connected to a Studio Display. Likewise, while "Hey Siri" normally requires an...
Read Full Article • 120 comments