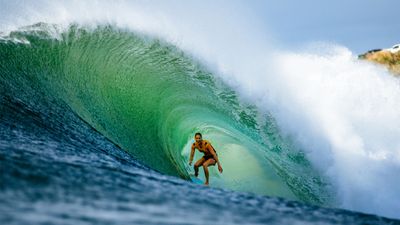 Apple says that each episode will feature a "rich exploration" of the people who make up the 2021 World Surf League Men and Women's Championship Tour, bringing viewers along on a journey to some of the most incredible surf spots in the world. The first episode will take place in Hawaii, with the Championship Tour kicking off on December 4.

Some of the highest ranked surfers in the world will participate, like Italo Ferreira, Gabriel Medina, Jordy Smith, Caroline Marks, Lakey Peterson, and Stephanie Gilmore.

The docuseries will "dive into different surfing cultures" and will visit topics tied to the sport such as eco-conservation, sustainability, and marine preservation. Box Films and the World Surf League are teaming up to produce the docuseries for Apple.

Madmic23
This show will probably be a good demo for 4K HDR TV's. I started watching Tiny World, and that seems to have been made to show off 4K TV's.
Score: 3 Votes (Like | Disagree)

You beat me to it, and you said it better than I would've said it. When I first saw the photo in this article, I immediately thought of Mavericks.
Score: 3 Votes (Like | Disagree)

Haha, that's the first thing I thought about when I saw the picture, too.
Score: 2 Votes (Like | Disagree)

Meanwhile, HBO Max is giving us Wonder Woman 1984, Matrix 4, and Dune.
I mean, surfing's cool. But would I subscribe to Apple's abysmal service for it? Nope.
Score: 2 Votes (Like | Disagree)
Read All Comments

The MacRumors Show: Mark Gurman Talks Through Everything Apple is Expected to Announce in 2022

Thursday January 6, 2022 8:32 am PST by Hartley Charlton
Bloomberg reporter Mark Gurman joined us on The MacRumors Show podcast this week to discuss everything we're expecting from Apple in 2022, providing insights into over a dozen of Apple's upcoming products. Gurman also shared his expectations for Apple in 2022 in the latest edition of his "Power On" newsletter. Subscribe to the MacRumors YouTube channel for more videos. The second episode of ...
Read Full Article • 41 comments