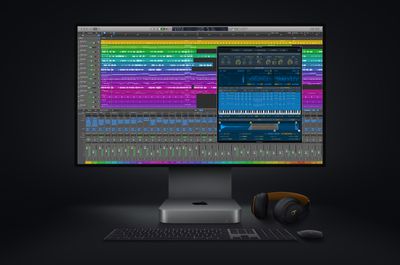 Tulupov used a mix of external displays, ranging from 4K to 1080p, as the Mac's Thunderbolt ports do not have the bandwidth to simultaneously run six 4K displays at full resolution. Users would therefore still have to be selective about their external display setup when it comes to resolutions.

In testing, running full-resolution videos across the various displays at the same time as rendering in Final Cut Pro, Tulupov found performance to be "awesome," with very few frames being dropped. When closing and opening the MacBook Air, the displays behaved as expected, and the setup seems to be more than adequate for daily use.

Tulupov noted that he did not test this setup with Sidecar for the iPad, but it may still be possible to run Sidecar in addition to the external displays for even more screen space.

In a separate video, Tulupov explained how to go about connecting additional external displays to an M1 Mac using a DisplayPort adapter. The process simply involves installing DisplayLink drivers, which are already Big Sur-compatible, and connecting the adapter via USB-C.

The workaround solution may offer a lifeline to users who were disappointed at the M1 Mac's limited external display capabilities.

Me wondering what would someone do with 5-6 external displays...

I don’t know either.... but give it ten minutes and someone will be in here complaining that to can’t do 10 displays.
Score: 80 Votes (Like | Disagree)

You'd be surprised. I am currently using a Mac mini M1 with my Apple XDR display and it works great. I am sure some people will scuff at the idea of running a $6000 display with a $1000 computer but with the M1 it works amazingly well. Similarly, not everyone will benefit from a multi display setup but it is nice that the capability is there.

mattopotamus
Just keep telling us how amazing these things are. I feel like I am running a relic over here :(
Score: 23 Votes (Like | Disagree)

duanepatrick
Me wondering what would someone do with 5-6 external displays...
Score: 22 Votes (Like | Disagree)
Read All Comments

Monday October 18, 2021 11:11 am PDT by Sami Fathi
Apple's newly announced high-end chip for the new MacBook Pro, the M1 Max, can support up to three Pro Display XDRs and a fourth 4K TV display all at the same time, a significant jump in support compared to the single display support that the M1 chip provided. The M1 Pro chip supports up to two Pro Display XDRs alone, while the higher-end M1 Max chip extends support to an additional Pro...
Read Full Article • 89 comments

Thursday August 26, 2021 11:11 am PDT by Juli Clover
Classic puzzle game Myst has been revived on the Mac and an optimized version of the title is now available for M1 Macs. Cyan has undertaken a rework of the game that takes advantage of Metal 2.1 and AMD FidelityFX Super Resolution for a 50 percent performance boost on M1 Macs that does not impact game quality. Myst for M1 Macs features improved modeling, textures, and dynamic lighting...
Read Full Article • 101 comments