Apple today hosted a virtual event to introduce its first three Macs with its custom-designed M1 chip, promising up to 3.5x faster CPU performance, up to 6x faster graphics, up to 15x faster machine learning capabilities, and up to 2x as long battery life. 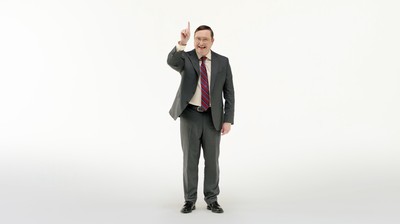 Humorously, the event ended with a brief appearance from John Hodgman, known as the PC guy in Apple's iconic "Get a Mac" ads from 2006-2009. Matching his persona from those ads, Hodgman attempted to justify his louder operation and inferior battery life as a PC compared to the new fanless MacBook Air with up to 18 hours of battery life.

Hodgman can be seen at the 45:27 mark of the Apple Event. We've also embedded a user-uploaded clip below, but it might be removed at some point by Apple:

Justin Long, who played the Mac in the ad campaign, did not make an appearance today.

sp3k0psv3t
Loved him and missed this
Score: 63 Votes (Like | Disagree)

zorinlynx
That made me smile so much!

I always thought Hodgman had so much more charisma than Long, despite him supposing to be the "uncool" one.

Hopefully this means the ad campaign comes back; it was a fun one.
Score: 34 Votes (Like | Disagree)

jkdsteve
Darn, I waited until the end to see Justins face all smug, great callback though! :D
Score: 25 Votes (Like | Disagree)

jprmercado
This throwback made my day! Wasn’t expecting it at all. The “I’m a Mac, I’m a PC” series, to me, is Apple’s most memorable marketing campaign.

Sunday June 13, 2021 11:31 am PDT by Sami Fathi
Apple will no longer require vaccinated customers to wear masks inside their retail stores in the U.S, a major shift in policy compared to last month, according to Bloomberg. The new change, expected to go into effect on Tuesday, will no longer require customers who have been fully vaccinated against COVID-19 to wear masks inside Apple Stores in the United States. Bloomberg notes that Apple...
Read Full Article • 539 comments