Apple today announced a third fall 2020 event, which is set to be held on Tuesday, November 10 at 10:00 a.m. on the Apple Park campus in Cupertino, California. As with the September and October events that saw the debut of new Apple Watches, iPhones, and other products, the November event will be digital only, with Apple likely providing pre-taped segments for each new product that will be announced. 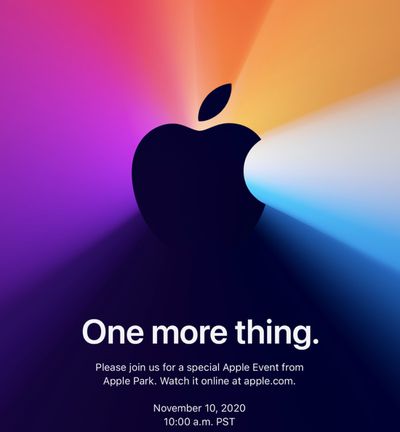 Apple has already announced a new fourth-generation iPad Air, eighth-generation iPad, Apple Watch Series 6, and iPhone 12 lineup, the November event is expected to be a Mac-centric event with Apple introducing the first Apple Silicon Mac. We've got a quick overview of what to expect below.

‌Apple Silicon‌ chips will bring improved performance and more efficient Macs that have a deeper integration between hardware and software, allowing for things like universal apps that run on all Apple devices.

There's no clear word yet on which Mac will be the first to get an ‌Apple Silicon‌ chip, but rumors suggest Apple is working on a new MacBook Air or a revived 12-inch MacBook, so the lower-cost MacBook line could see an update first. There are also rumors of a new 14-inch MacBook and a 24-inch iMac, so these are possible candidates as well.

We could get just a single Mac or multiple Macs could be refreshed with ‌Apple Silicon‌ at the same time.

This event will likely be held primarily to introduce the first ‌Apple Silicon‌ Mac (or Macs), but there are still some other products that are on the horizon that could see a launch at the November event.

Apple is developing high-end over-ear headphones that are a part of the AirPods family, offering an over-ear alternative to the AirPods and the AirPods Pro. Rumors suggest the AirPods Studio will cost $349 and will offer Active Noise Cancellation and a retro-style design.

A leaked image allegedly featuring the AirPods Studio
Rumors initially suggested AirPods Studio would launch before the end of the year, but Bloomberg recently said there have been development issues, so it's now unclear if we're still on track to get them in 2020.

AirTags are Apple's long-rumored Bluetooth trackers that can attach to items like wallets and keys, letting them be tracked right in the Find My app alongside iPhones, iPads, and Macs.

We've been expecting ‌AirTags‌ for quite some time now and we could finally see them in November, but there's also a chance that Apple is holding off until next year.

Apple plans to stream the Mac event live on its Events website, on YouTube, and on the Apple TV app when it kicks off at 10:00 a.m. Pacific Time. For those unable to watch, MacRumors will be providing full event coverage both on MacRumors.com and through the MacRumorsLive Twitter account.

As with Apple's prior two events, Apple has created an augmented reality teaser for the Apple event, which can be viewed by visiting the event page on an iOS device. This month's event features a black Apple logo that opens and closes like a MacBook with a glowing rainbow background.

This is super cool. The Apple event logo in AR resembles opening and closing a MacBook. A new MacBook powered by Apple Silicon is coming. pic.twitter.com/R6pIpJTWPC — Neil Cybart (@neilcybart) November 2, 2020

mtneer
What about an updated Apple TV? Any chance?
Score: 56 Votes (Like | Disagree)

dantracht
Now this should be cool. Not in the market for any macs myself, but still interested.
Score: 26 Votes (Like | Disagree)

I remember when One More Thing was just an encore

The whole event is an encore event. I haven't seen apple do 3 consecutive events...
Score: 24 Votes (Like | Disagree)

the_color_orange
My body is ready.
Score: 22 Votes (Like | Disagree)

TheCoolGuy
The color of the invite matches the MacOS Big Sur wallpaper. Defiantly a mac event. macOS Big Sur release is delayed for this.
Score: 21 Votes (Like | Disagree)

Doomtomb
I remember when One More Thing was just an encore