The relationship between longtime partners Apple and Foxconn is eroding due to a battle over profit margins, according to a new report from The Information. While Apple's gross profit margins are close to 40 percent, Foxconn's profit margins are in the single-digit percentage points, leading Foxconn to employ questionable tactics in an effort to grow its profits. 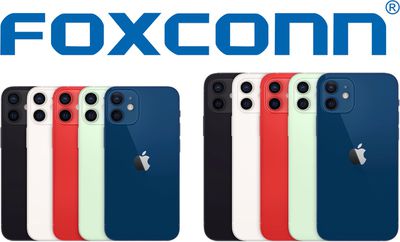 For manufacturing projects, Foxconn routinely tells Apple that it hired more workers than it actually did. Foxconn has also used Apple-owned equipment when making devices for Apple's rivals, and has taken shortcuts on component and product testing. As a result, Apple has increased monitoring and tracking of Foxconn employees and its equipment that's in Foxconn facilities.

More than two dozen former Foxconn and Apple employees told The Information that the relationship between the companies is changing as Apple seeks to diversify its supply chain. Apple originally spoke to Foxconn about manufacturing the AirPods Pro, for example, with Foxconn expecting to win the contract and retrofitting a facility for production purposes only to see the contract go to Foxconn's competitors.

Foxconn manufactures between 60 and 70 percent of the iPhones sold each year, and Apple is by far Foxconn's largest customer, so supply chain diversification is a major threat. Under Tim Cook, Apple has sought cost reductions and implemented aggressive audits of manufacturing lines.

To generate more profit, Foxconn has tried selling its own equipment for manufacturing and component testing with limited success, as well as moving some manufacturing products in-house. Foxconn developed its own chemicals for polishing the iPhone's screen rather than relying on chemicals from a Japanese company, for example.

Foxconn has disregarded some of Apple's policies, using Apple equipment for non-Apple products as mentioned above and providing Google employees with a tour of a Foxconn factory manufacturing the 12-inch MacBook ahead of its release. Foxconn also reportedly cuts corners with manufacturing. With the ‌iPhone‌ 7, some reject phones had loose screws or tiny bits of metal that were supposed to be disassembled, but Foxconn instead opened the flawed phones, removed debris, and resealed them to avoid wasting materials, a process hidden from Apple.

More detail on the souring relationship between Foxconn and Apple and additional examples of tension between the two companies can be found in The Information's full report, which is well worth reading.

chachawpi
Maybe Apple should use its size and power for good and take a cut in their own profit margins for the purpose of bringing the manufacturing home.
Score: 46 Votes (Like | Disagree)

rjp1
Apple’s greed ... every where ... will probably be what will bring about their downfall.
Score: 28 Votes (Like | Disagree)

nwcs
I’m surprised it took this long for this to occur. This may be the reason why Apple has been diversifying its manufacturing rather than political issues or humanitarian ones.
Score: 18 Votes (Like | Disagree)

robjulo
Of course...greed that would be excoriated on this site if it were any other company other than Apple, will be cheered by the usual suspects here.
Score: 16 Votes (Like | Disagree)

Maybe Apple should use its size and power for good and take a cut in their own profit margins for the purpose of bringing the manufacturing home.

If they wanted that, they would be manufacturing in the US a long time ago. They just prefer to get a much larger profit margin with much cheaper labor.
Score: 13 Votes (Like | Disagree)

We need to include *all* the tech giants in this, not just Apple. And we also should not forget the telecomms.

Jacques Attali was right. Corporations and their CEOS are becoming the new feudal overlords.

A company with Apple's size, power, and influence should feel obligated to move the goalposts and set an example for others.
Score: 11 Votes (Like | Disagree)
Read All Comments

Monday November 16, 2020 4:32 am PST by Tim Hardwick
Apple has begun sending foldable iPhones to assembly partner Foxconn for testing purposes, with a projected release set for September 2022, claims a new Chinese report out today. Citing supply chain sources, Economic Daily News says the testing involves evaluating the use of OLED or Micro-LED display technology, because the choice of either screen will affect the subsequent assembly methods. ...
Read Full Article • 142 comments

Wednesday May 5, 2021 5:07 am PDT by Joe Rossignol
Apple today announced it has awarded $410 million from its Advanced Manufacturing Fund to Pennsylvania-based II-VI, a manufacturer of optical technology. The funds will help create additional capacity and accelerate delivery of future iPhone components, supporting more than 700 jobs in Sherman, Texas; Warren, New Jersey; Easton, Pennsylvania; and Champaign, Illinois, according to Apple....
Read Full Article • 29 comments

Thursday November 26, 2020 3:07 am PST by Tim Hardwick
Apple has asked Foxconn to move some of its iPad and MacBook assembly from China to Vietnam in an effort to minimize the impact of ongoing trade tensions between the U.S. and China, according to sources cited by Reuters. Foxconn is building assembly lines for Apple's iPad tablet and MacBook laptop at its plant in Vietnam's northeastern Bac Giang province, to come online in the first half of...
Read Full Article • 90 comments

Wednesday August 12, 2020 7:55 am PDT by Joe Rossignol
China will no longer be the world's manufacturing epicenter going forward, according to Apple's largest supply chain partner Foxconn, which has been gradually expanding its operations in other countries amid the U.S.-China trade war. "No matter if it's India, Southeast Asia or the Americas, there will be a manufacturing ecosystem in each," said Foxconn chairman Young Liu, according to Bloombe...
Read Full Article • 120 comments