One of the big new features of iOS 14 is Home Screen widgets, which provide information from apps at a glance. The widgets can be pinned to the ‌Home Screen‌ in various spots and sizes, allowing for many different layouts. 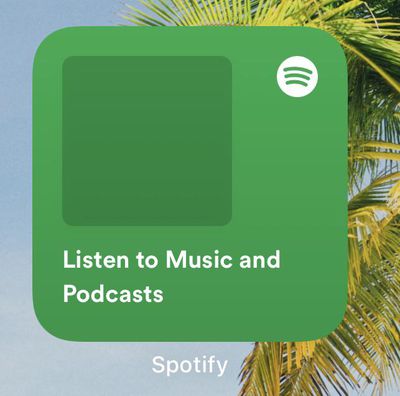 Image credit: Reddit user AustinMauritz
Many third-party apps have released widgets, and now evidence that Spotify is developing its own official widget has appeared in a TestFlight beta.

The widget is currently available in small and medium sizes, with the former designed to display the artwork of the last played artist, song, or album, while the latter size shows four of the same content elements.

Unfortunately there are no play, pause, or next song buttons, since Apple only allows widgets to present read-only information, with interactive elements such as scrolling elements or switches not allowed, presumably due to battery life considerations.

Image credit: Reddit user Lupolo
Instead, both widgets include the text "Listen to Music and Podcasts," and tapping the widget opens the Spotify app. Based on user reports on Reddit, the Spotify widgets don't yet display album artwork, but the fact that they exist at all proves that Spotify is working on them.

Last month, we reported that Spotify is testing dedicated support for direct audio streaming to Apple Watch without being connected to ‌iPhone‌.

There's no indication that the appearance of the beta feature is tied to a particular version of watchOS or iOS, but hopefully it won't be long before the ability to stream Spotify from the wrist will be available to all subscribers.

itsmilo
I am sure those buttons will be allowed by iOS 16 or so. Apple always has to come up with half baked and limited new features at first before opening it up to devs. Seriously, a music widget without play or next buttons is just dumb.

what do I gain from looking at an album artwork on the Home Screen?
Score: 31 Votes (Like | Disagree)

otternonsense
What's the point of this widget design?! There's minimum info density and barely any calls to action for the user –it's a rounded waste of space. If it was at least as informative and interactive as the Watch app it would make sense. I can't believe it's 2020 and my mom can have THIS interface on her €150 Nokia and my €1300 iPhone is riddled with kindergartener sized squares that do nothing.

Nothing is stopping you from switching to Android and enjoying this feature as well. There’s a reason you chose iOS over Android.

even if switching was a breeze and there was no issue with my content, libraries, and overall ecosystem lockdown, I can’t fully detach from iOS because cross platform design is part of my job.

Or here’s an idea, maybe I can still comment as a long term user on the obvious weaknesses of a formerly perfectionist UI experience without being asked to ostracize myself by fans and zealots?
Score: 12 Votes (Like | Disagree)

Populus
I don’t like this new passive widgets, I don’t see their utility to be honest, if I cannot do anything with them
Score: 7 Votes (Like | Disagree)
Read All Comments

Restoring Some iPad 9, iPad mini 6, and Some iPhone 13 Models From Backup Can Cause Widgets to Reset

Thursday September 23, 2021 7:09 pm PDT by Juli Clover
Apple today said that it has discovered an issue that can cause widgets to revert to their default settings after restoring an iPhone or an iPad from backup. The bug affects "a limited number" of iPhone 13, iPhone 13 mini, iPhone 13 Pro, iPhone 13 Pro Max, iPad 9, and iPad mini 6 devices. Apple says that those who run into this issue will need to customize their widgets again. Customizing ...
Read Full Article • 32 comments