In November 2018, Spotify released an accompanying app for Apple Watch that allows iPhone users to access and control their favorite Spotify music and podcasts from their wrist. 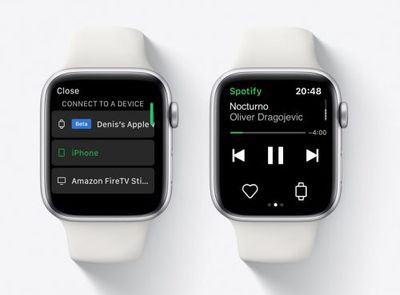 Image via iPhone-Ticker.de
One of the limitations of the app is that it doesn't allow users to stream music directly to their Apple Watch without an ‌iPhone‌ connection, which effectively makes it a wrist-based remote control for Spotify on ‌iPhone‌.

That could be set to change, however, as iPhone-Ticker.de reports that some users of the app are seeing dedicated support for direct audio streaming to Apple Watch without being connected to ‌iPhone‌.

Users with the feature report that they can stream Spotify through connected Bluetooth headphones or through the Apple Watch's built-in speaker over LTE or Wi-Fi. The function appears in the app as a blue beta icon, suggesting it's still an experimental feature with limited rollout.

There's no indication that the appearance of the beta feature is tied to a particular version of watchOS or iOS, but hopefully it won't be long before the ability to stream Spotify from the wrist will be available to all subscribers. That should come as good news for Apple Watch LTE owners who regularly leave their ‌iPhone‌ at home to go for a run, for instance.

Having said that, the Spotify app for Apple Watch still has no option to store music locally on your wrist for offline listening, so hopefully that's something the company is also working on behind the scenes.

Quixotic3
I still only really care about being able to store a playlist locally so that if I am biking or out for a hike etc. I don't have to carry a iPhone
Score: 13 Votes (Like | Disagree)

agffth
I'd much rather just download songs for offline playback. How is this not standard for Apple Watch by now?
Score: 8 Votes (Like | Disagree)

This exact feature made me move to Apple Music years ago... This is just beyond lazy from Spotify and too little, too late!

Before watchOs 6 is was not possible by apple restrictions not because of laziness ;)
Score: 6 Votes (Like | Disagree)

dannyyankou
Crazy how this wasn’t already a feature
Score: 4 Votes (Like | Disagree)
Read All Comments

Thursday July 1, 2021 11:03 am PDT by Juli Clover
Spotify today announced the launch of new beta version of its desktop app that's optimized for M1 Macs with native Apple silicon support. According to Spotify, the beta software features compatibility improvements and optimizations for the Arm-based M1 systems from Apple. The beta software can be downloaded from Spotify's community site, and Spotify is seeking feedback on how the software ...
Read Full Article • 74 comments