Apple continued to dominate the North American wearables market in the second quarter of 2020, with a growth of nine percent year-on-year, according to a new report by Canalys. 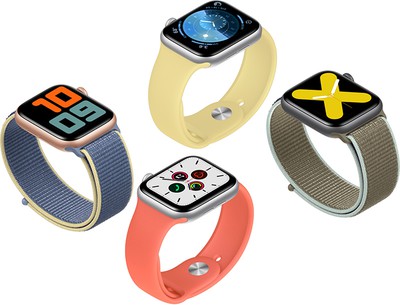 The shipments of wearables in the North American market grew 10 percent in the second quarter of 2020, but the value of the market remained flat year-on-year. A boom in low-end activity trackers meant that the average selling price of a wearable declined by 11 percent to $235. The surge in more basic devices offset the United States' third consecutive quarter of smartwatch decline.

Canalys predicts that going into 2021, medical-oriented devices will move certain products into an elevated tier, creating much stronger differentiation between casual fitness devices and those that offer advanced health tracking. The upcoming Apple Watch Series 6 will likely contribute to this by offering new health-tracking features such as blood oxygen monitoring.

They have a very strong incentive not to do this. Apple Watch is a product that keeps you locked to the iPhone (most of Apple's revenue) and their services ecosystem.

Switching to Android becomes a lot harder when you have to give up your apps, iCloud storage, HomePod and $300+ Watch.

Or, they would open up the Watch to non-iPhone owners, which is a huge number of people, who would then get a [hopefully positive] taste of the Apple eco-system and potentially increase the chances of getting more people to switch to iPhone. It’s how Apple grew its Mac business, by getting people comfortable with Apple products like the iPod, iPhone and iPad, who then wanted a Mac for work / school / personal use.
Score: 7 Votes (Like | Disagree)

alpi123
I wonder how much it will grow if Apple allowed using the Apple Watch without an iPhone.
Score: 5 Votes (Like | Disagree)

I wonder how much it will grow if Apple allowed using the Apple Watch without an iPhone.

They keep taking steps in that direction. I don’t think it’s a matter of permission, it’s a matter of them getting it to where they feel it can stand on its own. Now its got LTE, Software Update, and the App Store. I’d say it’s pretty close.
Score: 4 Votes (Like | Disagree)

Had NO idea that the Numbers are so low Across the Board !

They may have taken market share away from others, but it doesn't look like much of a market to pursue !

AAPL may simply be in the smartwatch market for the Hype benefit !

Given the Pandemic and financial instability in many sectors, the growth for Apple while modest, is still a good sign, in my opinion. The other aspect that may reflect slower than expected numbers is technology is not where many want to see it with the Apple Watch. As such, many are holding on to their watches longer.
Score: 2 Votes (Like | Disagree)

4-5 day battery life isn’t possible without giving up a ton of features that make the Apple Watch better.

Plus, almost anyone is willing to charge at night, meaning a day is plenty of battery life.
Score: 2 Votes (Like | Disagree)

Wednesday January 27, 2021 2:26 pm PST by Juli Clover
Apple's Wearables, Home, and Accessories category, previously known as the "Other" category, brought in record revenue in the first fiscal quarter of 2021 (fourth calendar quarter), hitting $13 billion, up from $10 billion in the year-ago quarter. The 30 percent growth the category saw during the quarter was driven by demand for the Apple Watch, HomePod mini, and all of the AirPods models,...
Read Full Article • 7 comments

Thursday May 27, 2021 3:12 pm PDT by Juli Clover
Following the iOS 14.6 and watchOS 7.5 updates, Apple Watch Series 3 owners who update their devices to a new version of watchOS are prompted to unpair and re-pair the Apple Watch from the iPhone during the update process because of storage space constraints. The GPS-only version of the Apple Watch Series 3 only has 8GB of internal storage, which limits the amount of space available for...
Read Full Article • 209 comments