Apple mistakenly approved and notarized a common kind of malware for macOS on at least two occasions, reports TechCrunch. 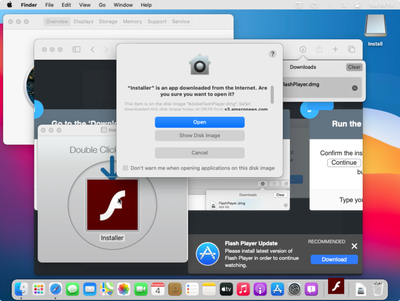 Apple requires developers to submit their apps for security checks to run on macOS in a process called "notarization." Notarization was required from the launch of macOS Catalina. If software has not been notarized, it will be blocked by default in macOS.

Peter Dantini and security researcher Patrick Wardle at Objective-See report that they have found the first malware for Mac that has been successfully notarized by Apple, even for the latest beta version of macOS Big Sur. The notarized malware was disguised as an Adobe Flash installer, which is an oft-used technique to convince unknowing users to install a trojan.

It contained "Shlayer" malware, which is said to be the "most common threat" to Macs in 2019. Shlayer is a kind of adware that intercepts encrypted web traffic, even from securely-encrypted HTTPS-enabled websites, and replaces it with its own ads to raise fraudulent ad revenue.

The researchers believe that Apple cannot have detected the malicious code when it was submitted for approval. The discovery is particularly surprising, given that the malware and its vehicle are extremely common. Upon notification from the researchers, Apple revoked the notarization.

"Malicious software constantly changes, and Apple's notarization system helps us keep malware off the Mac and allow us to respond quickly when it's discovered. Upon learning of this adware, we revoked the identified variant, disabled the developer account, and revoked the associated certificates. We thank the researchers for their assistance in keeping our users safe," an Apple spokesperson told TechCrunch.

In spite of Apple's statement, the researchers reported that the bad actors were able to get yet another malware trojan notarized soon after. The second notarized payloads were still approved by Apple as of yesterday.

Earlier this month, a new kind of Mac malware was discovered that infects via Xcode and supposedly can infiltrate the Mac App Store, undetected by Apple.

larrylaffer
Apple's gatekeeping here must be truly awful. These people disguised their software as coming from one of the world's biggest software vendors, and it still made it through?
Score: 17 Votes (Like | Disagree)

julesme
If I never again hear of Flash for the rest of my life, it will still be too soon.
Score: 12 Votes (Like | Disagree)

Just another reason why we should be allowed to install 3rd party apps on iOS with out the App Store. Just because Apple approves the app (I know it’s for macOS in this particular article) doesn’t mean it’s guaranteed to be safe.

This is a totally different case. "Notarization" is just Apple running an automated malware scan on the apps, it's not a manual review by an actual person.
Score: 11 Votes (Like | Disagree)

CarlJ
An actual real-life notary public doesn’t certify anything about the content of the document you’re signing, they only witness that it was actually you that signed it.

I expected that Apple’s notarization service was primarily designed to associate an app with a developer, and register the pairing with Apple, so that if the app subsequently starting doing something really unsavory in the real world, posing a threat to customers, it could be shut off by Apple.
Score: 10 Votes (Like | Disagree)

Proof that their notorization is worthless. But it sounds good on paper.

No it's not. Notarization is not malware detection. It ensures that the binary actually came from who it claims to have come from. That's it. Just like a notary public proves that a document was signed by the person who claims to have signed it, and doesn't prove that the contents of the document are true.

This is a weird news article.
Score: 8 Votes (Like | Disagree)

BigMcGuire
Patrick Wardle at Objective-See ('https://objective-see.com/blog/blog_0x4E.html') --- This guy is doing a lot of great work. I run several of his apps. Very cool!
Score: 6 Votes (Like | Disagree)
Read All Comments

Wednesday July 6, 2022 4:59 am PDT by Joe Rossignol
Apple today announced that the new MacBook Air equipped with the M2 chip will be available to order starting Friday, July 8 at 5 a.m. Pacific Time. Apple said deliveries to customers and in-store availability will begin Friday, July 15. MacRumors exclusively reported that Apple planned to launch the new MacBook Air on July 15, and the date has now been confirmed by Apple. Customers will be...
Read Full Article • 160 comments