Apple today launched a livestream test on YouTube that lists a September 10 date, which has led to some speculation that Apple could be holding an event on that day. Apple quickly removed the testing stream, but dozens of Twitter users and MacRumors readers were able to capture screenshots. 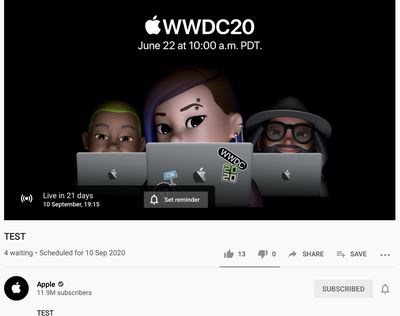 Image via Reddit
There is no confirmation that September 10 is the date that Apple plans to hold an event, however, and it could just be a random date entered for a livestream test, or the date that was used last year as last year's iPhone event took place on Tuesday, September 10.

Apple does not typically hold events on Thursdays, so September 10 would be an unusual choice. There's no clear word on when Apple might hold an event this year because 2020's ‌iPhone‌ release timelines will be different. Apple at the end of July confirmed that this year's iPhones would launch a few weeks later than usual, meaning an October debut instead of a September debut.

Apple could still hold an event in September, but leaker Jon Prosser has said that the Cupertino company will hold its event in October, during the week of October 12. Whether that prediction is accurate remains to be seen. Either way, the September 10 date is not likely to be the date of the event, and the week of September 7 is probably out all together. September 7 is Labor Day, a holiday, and Friday is September 11, a date that Apple avoids.

If the event isn't held in October, the week of September 14 would be another solid guess as to when an event might happen.

HeavenDynamic
Last year, the iPhone event was held on September 10. I think it's just a mistake.
Score: 9 Votes (Like | Disagree)

I checked the reddit post, it's BST so that makes it 11:15am Pacific time... still a bit odd

This entire year is a bit odd.
Score: 5 Votes (Like | Disagree)

HeavenDynamic
At least we know that things are moving in Cupertino.
Score: 5 Votes (Like | Disagree)

Apple_Robert
I am available to view the announcement ceremony any day that ends in y.
Score: 4 Votes (Like | Disagree)
Read All Comments