Apple Pay has gained several new partners in Europe this month, including American Express in the Netherlands, ING in Italy, Santander in Portugal, and UBS in Switzerland, according to a recently updated list on Apple's website. Canadian carrier Rogers has also introduced Apple Pay support for its line of Mastercards. 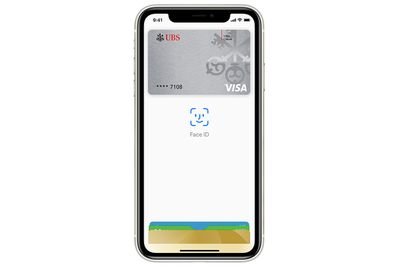 Apple Pay launched in 2014 in the United States and is now available in over 40 countries around the world. To add a card to Apple Pay, open the Wallet app on an iPhone and tap the plus sign in the top-right corner. Your card issuer will verify your information.

I did mean Apple Pay, like the article was about.

I suppose in there might be hope they could come up with something together, but are there ongoing efforts along those lines?

In Germany, the largest banking groups, co-operative banks/credit unions ("Volksbanken") and savings banks ("Sparkassen", owned mainly by municipalities) each did create their own digital payment solution (which was only available on Android because Apple blocks access to NFC by third-party payment solutions) but as in Switzerland caved in in 2020 and 2019, respectively, and also offered Apple Pay. The general pattern being the same, in that the largest bank was holding out the longest.

BTW, the Swiss solution, TWINT, does work both on Android and iPhones because it doesn't use NFC but custom Bluetooth beacons that need to be added to the payment portals. It got good coverage in Switzerland because it managed to strike deals with the two largest supermarket chains (which together have an almost 70% market share for the whole retail sector).

Germany and Switzerland might also have been at a disadvantage since the usage of cash in both countries has remained high, thus making it harder for local digital payment solutions to gain critical mass. But in the end, probably only a pan-European solution with at least most major countries joining forces could have created a viable competitor to Apple Pay and Google Pay.
Score: 2 Votes (Like | Disagree)

There were still banks in Europe that didn’t support Apple Card? Sheesh…

I believe this is talking about Apple Pay. As for Apple Card, I don't think it is even available outside the US.
Score: 2 Votes (Like | Disagree)

It's not. It certainly isn't in Europe - sadly.

Just another thing not available in Europe :/
Score: 1 Votes (Like | Disagree)

When comparing prices, always keep in mind that US prices are without VAT, whereas in Europe prices are usually including VAT (19% pre-pandemic, currently 16% in Germany for example).

Yeah I know, but even if that weren’t the case and the price were the same in the US and outside it would be unfair for users outside the US, who will always be missing one or more features, to pay the same price as US users who always get all the features. Especially in regions such as Africa or spanish speaking Latin America, where users are missing the vast majority (more than 50%) of the features and services that US users do get on apple’s products.

Just to give you an example: users in Mexico and the rest of Hispanic America pay at least 15-20% more than US users for an iphone or apple watch due to taxes, exchange rates, etc. Yet those users don’t get a lot of features that US users do get use such as News, Apple Pay, Apple Cash, the Apple Card, ECG on the apple watch, Covid 19 exposure notifications, most of the features of Apple Maps and any other new feature or service that apple may announce when they launch new hardware. Then why are they still required to pay for apple products at full price and even a bit more due to taxes and exchange rates when they can’t use more than half their features?
Score: 1 Votes (Like | Disagree)

It’s starting to look like Apple restricting the use of NFC was pretty forward looking for them. I remember there was a kerfuffle somewhere else, Australia maybe, over that as the local banks wanted to implement their own payment system. Apple wasn’t preventing that directly, but in effect was doing so indirectly by not allowing use of NFC.

Yes it was in Australia. The four largest banks in the country, known commonly as the Big Four, held out of supporting apple pay for years because they were upset at not being able to offer their own wallet apps to iOS users due to Apple restricting the use of the NFC chip for payments to Apple Pay only. They also disliked apple’s fees because they thought the fees were a bit too steep. But unfortunately, Apple got its way: they never opened access to the NFC chip for payments and now all of the Big Four banks do support apple pay. So it looks like so far it’s still either apple’s way or the Long Island Expressway when it comes to the using the NFC chip on iphone and apple watch for payments. No one in the world has even got close to making them budge on that.
Score: 1 Votes (Like | Disagree)

There were still banks in Europe that didn’t support Apple Card? Sheesh…

It's annoying yea. I can imagine banks don't like to be controlled by Apple, so many banks invested in other mobile payment systems. The thing is, Apple has a monopoly on iOS so no mobile payment system will succeed apart from Apple Pay. Banks are realising that now.
Score: 1 Votes (Like | Disagree)
Read All Comments