Back in January 2017, independent subscription app service Setapp launched as an alternative to the Mac App Store, and now offers unlimited access to over 190 Mac apps across a wide range of categories for a flat $9.99 monthly fee.

Today, Setapp announced that users can now also unlock and use premium iOS versions of apps that are currently hosted through the service. 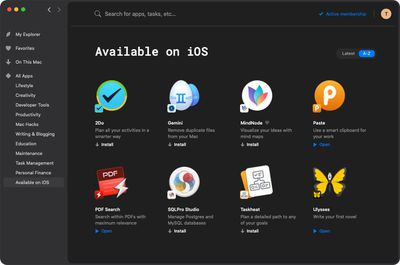 In order to use iOS apps, Setapp subscribers register their iPhones and iPads as additional devices on their plans (per device price has been reduced from $4.99 to $2.49). Once they've done that, they can check out the iOS versions of Mac apps that appear in the "Available on iOS" category section of the Setapp UI.

Each app in the section has two scannable QR codes associated with it: One that installs the app on the user's iOS device through the App Store, and one that unlocks the full version of the app via Setapp activation.

"The addition of iOS apps to Setapp has been one of the most popular requests since we launched Setapp more than three years ago," said Oleksandr Kosovan, CEO and founder of Setapp. "Today we're excited to provide the option for people to use their favorite apps, wherever they go on their mobile devices. We look forward to the new opportunities this provides for enhancing productivity and getting work done."

In order to get into Setapp, Mac apps must pass a review process conducted by Setapp that examines items such as user experience, security overall functionality, respect for user data and privacy, appropriate use of notifications and reputation. iOS apps accessed through Setapp are reviewed by Apple before becoming available in the ‌App Store‌.

Setapp distributes customer revenue back to developers based on app usage within the service. New apps for macOS and iOS will be regularly added to Setapp, updates are free and all the apps are full-featured pro versions.

Setapp's catalog includes many popular apps in categories including productivity, design, writing, social media, and maintenance tools, all from approved vendors, and all apps on Setapp are available without ads or in-app purchases.

Donnacha
Paid articles are one thing, but it is deeply dishonest of MacRumors to describe this as Setapp "expanding" to iOS. Setapp users already had, as part of their existing subscription, access to iOS apps such as Ulysses, Paste, and Mindnode. You could also use multiple iOS devices, handy for those of us with both an iPhone and an iPad.

With the same excited marketing spin we witnessed when Setapp REDUCED the number of included Macs from two to one, now they are pretending that having to pay an additional $5 per month PER DEVICE to add an iOS to your subscription is a good thing.

Just to be clear, the "big news" here is that, yet again, Setapp is reducing the value it offers. They are REMOVING access that their users already had. They are demanding an additional $60 or, if you have two iOS devices, an additional $120 per year.

As Setapp increases its stranglehold on developers, it is worth asking: what sort of people are we dealing with here? Is this predatory behavior normal in Ukraine? What can users expect next?
Score: 7 Votes (Like | Disagree)

Stevez67
$9.99/mo subscription. And most are apps I'd never use. Kinda like cable TV subscriptions. No thanks.
Score: 7 Votes (Like | Disagree)

Juraj22
Unlocking app functionality on iOS via QR code is prohibited. This will not last long.
Score: 5 Votes (Like | Disagree)

My understanding is that setapp is a third party Mac app, so Apple doesn't get a cent of the subscription revenue. Pay via the Mac, unlock functionality in what would otherwise be a paid iOS app for free, not seeing how Apple would lay claim to any of that subscription money.

The poster above me did mention that unlocking app functionality this way was against app policy though, which admittedly is new to me, so if anyone can shed light on this...

Come on, this has been mentioned so many times the last few weeks with all these investigations going on.

This would be the relevant section of the guidelines:

* If you want to unlock features or functionality within your app, (by way of example: subscriptions, in-game currencies, game levels, access to premium content, or unlocking a full version), you must use in-app purchase. Apps may not use their own mechanisms to unlock content or functionality, such as license keys, augmented reality markers, QR codes, etc. Apps and their metadata may not include buttons, external links, or other calls to action that direct customers to purchasing mechanisms other than in-app purchase.
Score: 3 Votes (Like | Disagree)

Jebstyle
FYI you have to pay for the "additional seats" to be added to your account, each is an additional $4.99... boooooo
Score: 2 Votes (Like | Disagree)

Clever. And since they are native iOS apps, Apple can't do anything to block or ban said service (I think?).

Apple is getting their cut of the $9.99 subscription, I doubt Apple is losing anything here.
Score: 1 Votes (Like | Disagree)
Read All Comments