Google this week launched its newest smartphone, the $349 Pixel 4a, a low-cost device that's designed to compete with other affordable devices like Apple's iPhone SE.

We picked up one of the new Pixel 4a smartphones and thought we'd check it out to see how it measures up to the ‌iPhone SE‌, given that the two devices have such similar price points.

Subscribe to the MacRumors YouTube channel for more videos.
Both the Pixel 4a and the ‌iPhone SE‌ are "budget" phones that lack some of the features available in more expensive smartphones available from the two companies, but both are capable devices that offer similar performance.

The Pixel 4a feature a 5.81-inch OLED panel, which is larger than the iPhone's 4.7-inch LCD display. It has a pinhole camera cutout but is otherwise all screen, which gives it a more modern look and more viewable display area. The ‌iPhone SE‌ continues to feature thick top and bottom bezels that cut down on screen viewing area. 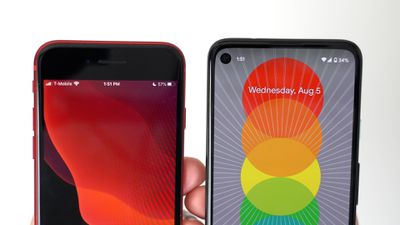 When it comes to a straight display quality comparison, you might think the Pixel 4a would be leagues better with the OLED panel, but both are close in quality (see video for comparison). The 4a wins out with OLED, but the ‌iPhone SE‌'s LCD panel still looks good.

The ‌iPhone SE‌ has a Touch ID Home Button in the bottom bezel, and the Pixel 4a also uses a fingerprint sensor, but it's located at the rear of the device. ‌Touch ID‌ beats out most other fingerprint sensors when it comes to accuracy and phone unlocking time, and there's no exception here. Google's fingerprint sensor is fine, but ‌Touch ID‌ is more accurate and less prone to failure.

To keep costs low, Google built the Pixel 4a out of plastic, so when it comes quality, the ‌iPhone SE‌'s glass and aluminum design wins out. It looks and feels like a more premium smartphone than the Pixel 4a, but the glass has more potential to break.

The Pixel 4a has an Octa-Core Qualcomm Snapdragon 730 processor, but it doesn't perform at the level of the A13. You may not notice a significant difference in every day usage, but there are some tasks where the ‌iPhone SE‌ will outshine the 4a, which is just a bit laggier and less smooth.

The ‌iPhone SE‌ has an older camera that was first used in the ‌iPhone‌ 8, and it's a 12-megapixel single-lens setup. The Pixel 4a also has a single-lens 12.2-megapixel camera, but it has some of Google's computational photography and image processing features, so photos on the 4a look better.

‌iPhone SE‌ photos feature a more natural color palette while the Pixel 4a's photos are cooler in tone, but the Pixel 4a images are sharper and crisper, even when lighting is poor. Google gave the Pixel 4a Night Sight, but Apple's ‌iPhone SE‌ doesn't support the Night Mode feature available in more expensive iPhones.

Apple does win out when it comes to video quality, though, because the ‌iPhone SE‌ supports 4K 60fps video and it has much better image stabilization than the Pixel 4a.

The ‌iPhone SE‌ runs iOS and the Pixel 4a runs Android, and since most of us are locked in to one ecosystem or another, operating system is one of the biggest factors when it comes to choosing a smartphone. Someone who has always used iPhones is likely going to opt for the ‌iPhone SE‌, and the same goes for Android and the Pixel 4a.

Both of these phones offer solid value for the price point, so it really comes down to ecosystem. Apple guarantees iOS updates for years to come, so the ‌iPhone SE‌ should be supported until at least 2024. Android smartphones don't often get as many updates, but Google is better about providing new software for Pixel phones and has pledged to provide updates for the Pixel 4a for at least three years.

In the future, we may actually see an Apple-designed lower-cost smartphone that more closely mirrors the design of the Pixel 4a because Apple's rumored to be working on a new version of the ‌iPhone SE‌ called the ‌iPhone SE‌ Plus. It allegedly features an all-display design with a fingerprint sensor built into the power button, but it's not coming out until 2021.

JPack
Agreed - this review is sloppy.

"You might think the Pixel 4a would be leagues better with the OLED panel, but both are close in quality. The 4a wins out, but the iPhone SE is not too far off."

These are almost meaningless statements. How is it better? Give us some examples to qualify these statements.
Score: 26 Votes (Like | Disagree)

TechieGeek
Please don’t take this the wrong way, but this is a sloppy review.

You missed that the Pixel doesn’t have wireless charging, but does have USB-C instead of a lightning port.

I wish you could pull down the iOS notifications menu using a gesture on the TouchID sensor, as you can with the luxe (swiping down on the fingerprint sensor)
Score: 20 Votes (Like | Disagree)

davebarnes
One runs iOS and the other runs Android.
One will have software updates/upgrades for years to come. The other will be found on the island of misfit toys within 2 years.
Score: 17 Votes (Like | Disagree)

tha_man
I would choose SE, because I prioritize performance, longevity and security. I also find fingerprint sensor on the front more convenient than on the back. But if I would for some reason switch to Android, this Pixel would probably be my choice. It seems to be really good phone and a lot of bang for the buck. I also like the design with pinhole camera - much better looking than SE bezels or notch.
Score: 15 Votes (Like | Disagree)
Read All Comments